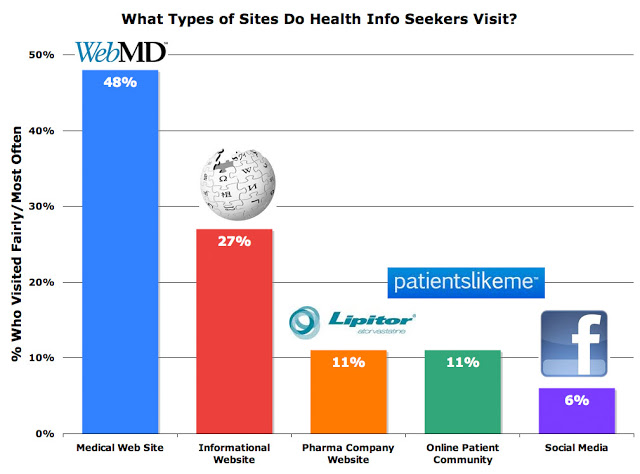 It’s unfortunate that the press release uses “captive audience” to describe consumers who go online for health information. To a marketer, a captive audience is a technical term (jargon) that merely means “people who cannot avoid being exposed to an advertisement.”

The top line takeaway from the press release is that only “slightly more than one in 10 (11 percent) [of consumers who go online for health information] regularly turn to a pharmaceutical company’s website to seek information about an illness or medical condition, compared to nine in 10 (92 percent) who look to other online resources more frequently.”

The press release then goes on to say that “pharmaceutical companies that are not fully leveraging multiple online channels are missing a real opportunity to address this captive audience. It also demonstrates that the fundamental shift from a predominantly one-way company-to-patient dialogue to enabling a patient-to-patient – and even a patient-to-physician dialogue – through the evolution of social networks and online communities, has resulted in fragmentation.”

From this, you — and probably many reporters as well — might conclude that the answer to my question is that consumers are not going to pharmaceutical company web sites so much and that the drug industry better engage in conversation with consumers on social networks and patient communities.

But if you look at the details of the survey, you’ll discover that social networks such as Facebook are visited even less often than pharma sites by online health information seeking consumers. See chart below (I created this chart from detail survey data sent to me by Accenture):

In other words, consumers are NOT flocking to Facebook to find health information.

So, why are pharmaceutical companies so interested in having Facebook pages, which, BTW, often do NOT allow comments? Simple. Facebook has surpassed Google in terms of Web site traffic (“eyeballs”) and pharma marketers are still seeking this “captive audience” to display ads (ie, Facebook pages), not to engage in conversation (for more on this, see “Drug Companies Are Flocking to Facebook for Eyeballs, Not Conversation“).