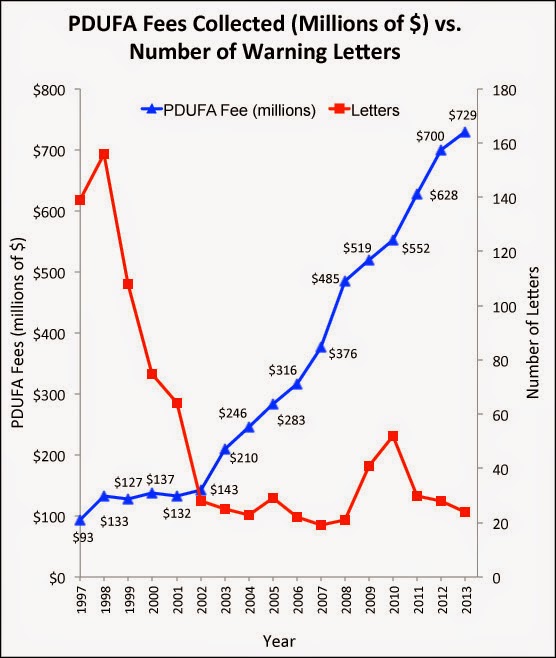 Dale Cooke (@PhillyCooke on Twitter) live tweeted from the FDLI’s Advertising and Promotion Conference yesterday and asked the question:

In other words, is the number of warning letters low because pharmaceutical marketers have learned to be more compliant with FDA regulations or is there some other reason? I suggested it was due to the dearth of newly-approved drugs, but Cooke reminded me that so far this year the FDA has approved as many drugs as it did for all of 2013.

Anyway, to test my hypothesis, I plotted the number of letters vs. the number of newly approved drugs from 1997 through 2014 (to date): 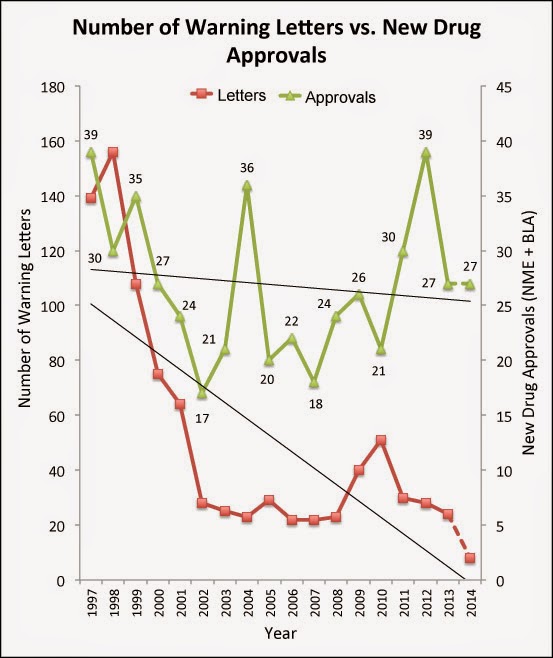 Is there a correlation?

Another theory is my PDUFA fee correlation hypothesis; i.e., the rise in PDUFA payments — which now account for about 65% of FDA’s budget for regulation of drugs — discourages the FDA from issuing warning letters.

I already wrote about this (see “Do PDUFA Fees Encourage Approval of Dangerous Drugs and/or Undermine FDA’s Regulatory Oversight of Approved Drugs?“), so I won’t get into again here. But here’s the relevant chart:

Neither argument is convincing, so I am going to agree with Cooke that pharma marketers have become more compliant with FDA regulations. Could the reason be that their MLR people have become more assertive after many major pharma companies, which do a lot of drug marketing, were fined billions of dollars for inappropriately, and in some cases illegally, promoting prescription drugs? For more on that, see here.