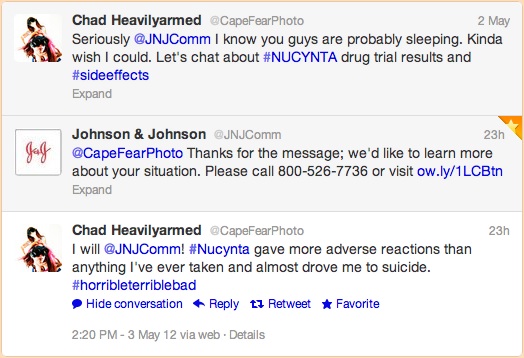 There are probably more than 100 pharmaceutical company Twitter accounts such as @JNJComm, which posts news and information from Johnson and Johnson’s Corporate Media Relations team (Devon Eyer – @DevonEyer – and Bill Price – @wtprice3).

With such a conspicuous presence on Twitter, I am amazed that I haven’t noticed very many complaints from consumers directed at these accounts. I’m specifically talking about complaints that relate to adverse drug reactions. Pharma companies are deathly afraid of having to deal with such complaints via social media mostly because of the FTEs that may be required.

But, really, how big a problem is it? I haven’t done a quantitative analysis, but I suspect that if @JNJComm gets one such complaint per month, that would be a lot.

About 20 minutes later at 12:21 AM, @CapeFearPhoto sent another tweet directed to @JNJComm:

“Seriously @JNJComm I know you guys are probably sleeping. Kinda wish I could. Let’s chat about #NUCYNTA drug trial results and #sideeffects”

“@CapeFearPhoto Thanks for the message; we’d like to learn more about your situation. Please call 800-526-7736 or visit http://ow.ly/1LCBtn”

The link leads to Janssen Pharmaceutical’s “Tweet Response” page, which was “last modified” on Apr 13 2012. This is the first time I’ve seen such a Web page. I wonder if other pharmaceutical companies have similar pages to which they direct Twitter users? The page informs visitors that:

“This is in follow up to your recent tweet regarding our product. As a pharmaceutical company, we are required to inform the Food and Drug Administration of any adverse experiences associated with our products. Therefore, our Global Medical Safety department would like to learn additional information about your experience and hope you will contact us at janssenmedinfo@its.jnj.com or at 1-800-526-7736.”

“I will @JNJComm! #Nucynta gave more adverse reactions than anything I’ve ever taken and almost drove me to suicide. #horribleterriblebad”

I’m not going to get into whether or not this qualifies as a reportable adverse event. But it should be noted that the tweet was directed specifically to @JNJComm and that @JNJComm responded PUBLICLY via Twitter within 38 or so hours.

Perhaps JNJ could have responded sooner. After all, the “Tweet Response” page was available and the tweet that @JNJComm eventually sent out could have been a MLR pre-approved “boiler plate” response all ready to go. Or was it? Maybe it took @JNJComm so much time to respond because it never before received such a message and had to craft an appropriate response and get it approved before it could be sent!

Whatever, just another pharma social media first for me to document. Here’s a screen shot of the relevant conversation for the record:

2014 Was Another Record Year for FDA: Fewest Number of Untitled/Warning...