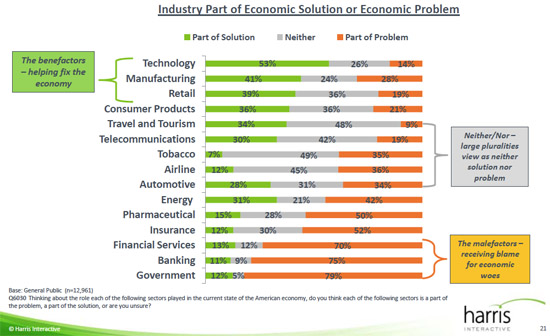 According to Harris, that puts the drug industry on the cusp of being a “malefactor” – an industry that Americans blames for economic woes. You can find the complete Harris report here.

Meanwhile, PhRMA, the industry’s trade association in the U.S., continues to churn out press releases that warns Americans that if the government passes such-and-such law or over-regulates such-and-such activity of the pharmaceutical industry, it will result in the loss of thousands, nay millions!, of American jobs.

Of course, the drug industry can be both part of the solution and part of the problem. It depends on whose problem/solution you are talking about.

It’s part of the solution for white collar workers who work in the U.S. pharma industry, have Rx medical coverage, and can afford prescription drug co-pays. Blue-collar workers and retired folk who depend more on government “safety nets,” however, may see  high drug prices and the drug industry’s antipathy toward Medicare rebates as part of the problem. The latter are not among the typical U.S. pharma work force since the drug industry is shipping more and more blue-collar manufacturing jobs overseas to countries like China.

Not only does this NOT support jobs in the U.S., it also endangers our drug supply.

In a story about counterfeit Avastin in the U.S., the link between overseas drug manufacturing and counterfeit or tainted drugs in the U.S. was suggested: “Most Americans don’t question the integrity of the drugs they rely on. They view drug counterfeiting, if they are aware of it at all, as a problem for developing countries. But the latest incident, which follows the appearance of other fake drugs in the U.S.—including counterfeits of the weight-loss treatment Alli and the influenza treatment Tamiflu—suggests it is a growing risk, especially as more medicines and drug ingredients sold in the U.S. are made overseas [my emphasis; see “Roche warns of fake cancer drug in US“). For more on this, see “Unsafe Drugs: Is It Counterfeiters or the Supply Chain That’s the Problem?“