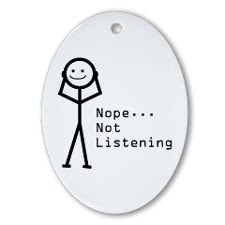 After criticizing Astrazeneca’s @AZHelps Twitter account as being a poor model for use of social media by the pharmaceutical industry (see @AZHelps: Is This a Good Model for Pharma Use of Social Media?), I received several comments that made me think a bit more about how pharma marketers are trying to adopt a new communication paradigm without giving up their old model of communication. That old model is essentially “tone deaf” when it comes to “listening” to consumers.

Don’t get me wrong. Pharma marketers “hear” what people are saying on social media sites such as Twitter. They just are not actually listening to what consumers are saying and understanding.

Let’s look at @AZHelps as an example of this. It appears that @AZHelps seeks out Tweets that mention problems people are having affording Astrazeneca medications. Apparently, AZ monitors social media using tools such a V-Fluence (see comments to the post cited above). This is not the same as having a real person monitor social media, but it’s a necessary tool to get an idea of what people are saying about your product out there. But just like any automated program, it lacks human intelligence — it hears, but does not listen.

One post the @AZHelps bots pricked up was this one, which was posted by @busterwilson:

“Almost home. Pat drove most the way. Second day of the trip w/extensive migraine! NO Zomig cause Obamacare made insur. Not wiiling 2pay4 it!”

After a couple days delay, @AZHelps responded with:

Did @AZHelps actually “listen” to what @busterwilson was really complaining about? No. They heard what they wanted to hear and responded with a “solution” to the problem they thought they heard. But they didn’t really listen to @busterwilson’s real gripe, which was about “Obamacare.”

Let’s use an analogy: How is social media like helping your wife deal with a problem?

A: It’s been my experience that when my wife complains about something, she is not looking for me to give her a “solution,” but for me to listen to her and understand her problem. The same may be true for helping patients who complain about products. Before you offer a solution — ie call this number — have a conversation and make sure you get to what the real problem is. In the case I cited here, @busterwilson was spouting off about “Obamacare” and no amount of free ZOMIG is going to put him at ease about that.

@AZHelps did not bother to learn more about @busterwilson and his Zomig problem, let alone about his problem with Obama. Turns out that @busterwilson is “a husband, father, grandfather, media personality, Sheriff’s Chaplain, motorcycle rider, and lover of Jesus!” It sounds like he has an agenda much bigger than the price of Zomig.

Of course, @AZHelps is not going to get into a discussion about “Obamacare.” AZ is more interested in getting IT’S message out about Zomig and making sure people call that 1-800 number.

“Corporate Blog” is an Oxymoron