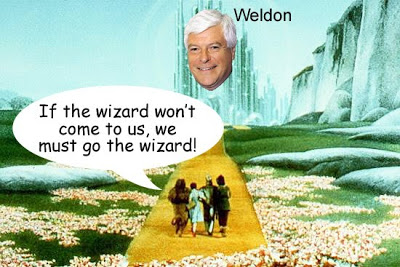 I just learned that Bill Weldon, JNJ’s CEO, who was asked to testify at a May 27 hearing of the House Committee on Oversight and Government Reform about the McNeil manufacturing problems, may send an underling in his place. According to Ed Silverman of Pharmalot “J&J [wrote] back to say Weldon had back surgery today and so he may not be able to travel to DC next week. Instead, J&J is prepared to send Colleen Goggins, who heads the worldwide consumer group. Weldon would still be willing to ‘communicate’ with the committee after he recovers.”

Oh, my aching back! It sure sounds like Weldon is trying to wriggle his way out of appearing before a public hearing to explain why McNeil’s manufacturing facilities “may be ‘out of control’ and not following internal standard operating procedures, much less FDA regulations,” according to Darrell Issa, a California Republican congressman and member of the Oversight Committee (see letter). Issa has asked committee chair Edolphus Towns to postpone the May 27 hearing.

[If I said that Weldon is “sending in a woman to do a man’s job,” I may be accused of being a sexist. But I know that women are often taxed with unpleasant tasks at pharma and other companies and that they are not compensated equal to men and are often treated unequal to men on the job  — see the recent Novartis settlement, for example. I also know that 86% of the members of the Oversight committee are men who may be less inclined to subject Colleen to withering cross examination. Did this figure into JNJ’s strategy? What do you think?]

From the statement received by Pharmalot, one could conclude that Weldon may never appear in person before Congress but may “communicate” in some other fashion. He sure has had a problem communicating via social media as I pointed out in my previous post (see “Despite Its Social Media Expertise, J&J Fails to Use It Effectively to Communicate to Consumers“). Now it appears he has a problem communicating in the real world!

I was asked what I would do in JNJ’s shoes by Melissa Davies — a mom and Social Media Practice Lead at Return on Focus, a company that helps companies market their brands. Melissa asked (in a comment to my previous post):

“John, could you share some thoughts on what you would advise JNJ to do as part of a more fully developed social media response strategy? Are you thinking the company should have more Tweets, engage on more sites, etc.? I’m curious what you think the ideal roadmap looks like.”

“For what it’s worth, I believe this situation calls for more information and conversation no matter what the channel or the road.

But since we are talking about social media, let’s stick to that.

Because the CEO has been targeted, is expected to meet with Congress, and posted a message to JNJBTW, he should lead the discussion. In addition to a formal letter posted to the corporate blog, how about opening up a YouTube channel in which he and McNeil executives talk directly to their audience and provide updates. They should allow comments — and respond to as many as necessary.

Twitter can work with this to keep people informed about what is going on and link to specific videos.

If the CEO talks to Congress, get the transcript and post it before anyone else does. Ask readers to comment on how well or not so well questions were answered by the CEO and what was missing.

Of course, there needs to be some progress if you are going to give updates. Actions speak louder than words. Social media won’t solve the problems.

Right now, I feel that JNJ doesn’t have a handle on what’s causing the problems. At least that’s what I suspect from the reports I have heard. Maybe there are complicated manufacturing issues that involve things JNJ doesn’t want to be made public (eg, importation of tainted supplies from China)? Maybe this is a good opportunity to provide a virtual tour of a Good Manufacturing facility with interviews of employees.

I don’t know if this is a roadmap or not, but when your company’s reputation is at stake, the leaders have to be visible. You can’t just say “one of our companies has let you down” and leave it at that. What are going to do about it so that it doesn’t happen again? is what people really want to hear from the people who are in charge, not the PR department.”

I have a call in to Marc Monseau, Director of Corporate Communications at JNJ. When and if he responds, I will provide an update.

SiCKO is Boffo but Not Anti-Pharmaco, per se