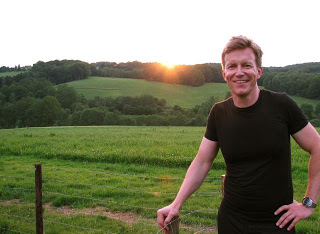 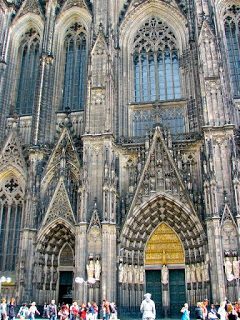 The Cologne Cathedral (German: Kölner Dom) is a Roman Catholic cathedral in Cologne, Germany. It took over 600 years to complete the construction of this famous church.

The Dom is said to house the “relics” of the three wise men. According to wikipedia, “the relics of the Magi were taken from Milan by Holy Roman Emperor Fredrick Barbarossa and given to the Archbishop of Cologne, Rainald of Dassel in 1164. The Three Kings have since attracted a constant stream of pilgrims to Cologne,” and this made Cologne a major Germany city.

Last week I visited Cologne on invitation from Dr. Frank Antwerpes, shown in the photo below standing next to his new “vineyard” on his farm somewhere about 30 minutes – Autobahn time – outside Cologne.

Dr. Antwerpes is the CEO of DocCheck, a publicly-held company that specializes in healthcare marketing, customer relationship management and eCommerce.

DocCheck comprises a health professional portal web site and a creative ad agency (antwerpes ag), which develops and implements communication strategies for new and traditional media with an emphasis on healthcare and business-to-business. For more about DocCheck, read “DocCheck: Das Portal” and listen to this podcast interview of Dr. Antwerpes: “Building the First Global Community of Doctors“.

I first met Frank about 13 years ago at a Pharma Internet conference in Philadelphia. At that time, the “hot topic” was the fact that the World Wide Web (WWW) was surpassing Gopher as the Internet protocol of choice. I doubt if anyone today remembers Gopher.

Anyway, Dr. Antwerpes invited me to speak to his agency’s clients about social media*. While there, I joked that it may take as long for the pharmaceutical industry to “master” social media as it took Kölners to complete the Dom.

It was a bit frustrating to speak to European pharma people about social media because I knew that most of the interesting stuff that pharmaceutical companies can use social media for — ie, to communicate with patients — cannot be done in Europe. Therefore, it may be a cold day in hell before European companies can master the use of social media to communicate with European citizens. Or maybe it will be only 600 years! But first, they have to find some wise men relics. Hmm… maybe that’s why I was invited to speak!

[ *Antwerpes paid my travel expenses plus a fee to speak to his clients.]