A $190,000 Levitra “ad” campaign in Hong Kong–developed by Interpublic Group public-relations agency Golin Harris–increased sales of Levitra in Hong Kong by 244% from August through October, according to an article in the Wall Street Journal (see “A Dose of Laughter for Touchy Issue“). Bayer, the drug company that markets Levitra outside the US, must be laughing all the way to the bank.

I have no idea how much additional sales income a 244% increase over three months represents, but it must be at least $2 million, wouldn’t you say? That’s a return on investment of over $10! How’d they do it?

“Bayer reconfigured its ad approach specifically to persuade conservative Chinese to see Western doctors about their sexual problems,” according to the WSJ article.

“The continuing series of colorful newspaper ads tell humorous stories about Hong Kong men’s struggles for virility. All the ads star Chinese comedian Wayne Lai Yiu-Cheung as a man with a problem, such as excess smoking, stress, or old age, that gets in the way of his sex life.”

“Part of the humor is that the ads leave embarrassing words and ideas up to innuendo and pun. Instead of mentioning erectile dysfunction specifically, most of them simply feature a photo of a limp, hot-dog-shaped balloon. One features a satisfied customer wearing a Superman costume with the “S” on his chest replaced by the Chinese word for “upright.” That character also happens to be the first in Levitra’s Chinese name.”

Here’s an example of an ad, which I scanned from the print edition of the article (the online version, see below, is not quite as funny): 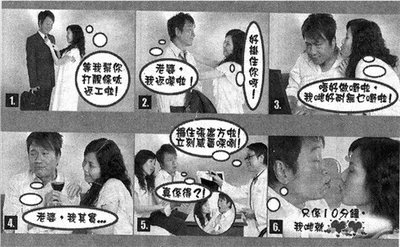 I cannot read Chinese and the article did not translate the dialogue, but the people in the ad could be saying this:

Panel 1: She: “Welcome home from work, dear husband. It’s kind of late, so no dinner for you! As you can see, I am ready for bed dressed in my most sexy and revealing pajamas.”

Panel 3: She: “What’s it going to take to get a rise out of that limp-dog balloon of yours?”

Panel 4: He: “Lots of traditional Chinese medicine and this glass of wine should do the trick.”

Panel 5: Doc: “Silly man, sexy bed clothes and alcohol are no match for this Western-style pill!” He: “A single pill?!”

Create Your Own Campaign!
Maybe some of my readers can offer better, more accurate (or at least funnier) translations?

Caveats: Your translation must adhere to local laws regarding DTC advertising, namely, “Hong Kong law actually forbids directly advertising prescription drugs. The Levitra ads hit a gray area in the law by neither specifically mentioning a medical problem nor specifically saying that Levitra can solve it. Instead, the limp balloon represents the problem, and an unmarked pill represents the solution. One recent ad that contains a photo of the Levitra box doesn’t even have the brand name on it.”

Also, you must be cognizant of local mores: As mentioned above, “leave embarrassing words and ideas up to innuendo and pun.”

Is This PR or Advertising?
The Levitra campaign featured in the WSJ was developed by a PR agency rather than an ad agency. It was low budget (although I don’t understand how it can feature celebrities and still cost so little). It appeared in newspapers, not TV. It got good coverage in the WSJ at no cost (probably). It’s been blogged (here). These are all trademarks of a PR campaign. So is it PR? Whatever. As i said before, there is often no bright line between PR and advertising (see “Marketing Disguised as PR“).

BTW, the following is the ad example used in the online version of the article: 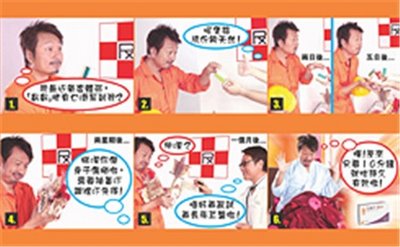 As anyone can see, even someone like me who cannot read the Chinese characters, this is not as funny as the print version above. Why WSJ uses a different version in its online edition than in its print edition is a mystery to me.

Now, THIS (Viagra) ad is funny:

Distribution of Reprints: Another Example of FDA Flexing Its Enforcement Muscles