Is Dr. Robert Jarvik, inventor of the Jarvik artificial heart, a fop? Or is he a flop?

Dr. Jarvik appears in all the recent Lipitor ads such as the print ad shown below, which I scanned from the recent issue of the The New Yorker. 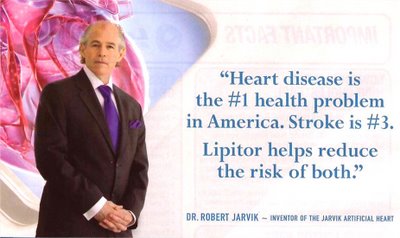 I was struck by the TV version of this ad where Dr. Jarvik strolls “foppily” through and around a hologram — or it seems like one — of a heart.

When I saw that natty suit, just the right amount of cuff showing, the PURPLE tie and matching handkerchief in the jacket pocket, and his peculiar way of walking, I thought immediately “gay!” Not that there’s anything wrong with that! (I also thought maybe the color scheme was more appropriate for Nexium — the Purple Pill.)

But “fop” may be a better term to describe Jarvik in these ads. I found this definition of fop at answers.com:

fop (fŏp) n: A man who is preoccupied with and often vain about his clothes and manners

Dr. Jarvik, dressed up in that purple tie ensemble, would be a perfect picture of a fop to include next to the definition in a dictionary.

Is there anything wrong with being a fop? You betcha! There is something odd about a foppy image of a doctor in a DTC ad. I just think it goes over like a lead balloon.

Inventor of an artificial heart or not, what guy wants to be examined by a doctor who looks like this! Maybe it’s an OK look for an OB/Gyn, but not a cardiologist — which, next to a brain surgeon, is the most manly medical specialty.

I ask that because recently I’ve seen a new version of the TV spot where Jarvik is dressed in a sports coat and open shirt. No purple tie — no tie all. I took the following photo off my TV: 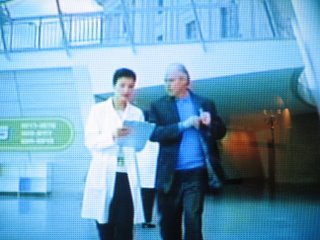 Much better, don’t you agree? And the blue shirt is true to the Lipitor brand color scheme.

Perhaps Pfizer CEO Jeffrey Kindler, who does not look like a man who has many fops as friends, saw the purple tie ad on TV and that’s why it was pulled.

Jarvik was touted as the first “real” doctor to be used in a drug ad — as opposed to fake doctors like the one suggested by Mandy Patinkin (who played Dr. Jeffrey Geiger on CBS’s Chicago Hope TV show) in the Crestor ads.

I am wondering which costs more — fake doctor or real doctor? Looking at the choice of clothes, I’d say Jarvik costs more than Patinkin.

But it’s all good. According to Robin Koval, president of Kaplan Thaler, the agency Pfizer hired to create the Jarvik ads, “We think Dr. Jarvik is an amazing spokesperson, [as the inventor of the artificial heart] he’s beyond a celebrity spokesperson.” Yeah, way more expensive and certainly more foppy!