“Everything is numbers” is the tagline of the hit TV show “Numb3rs”. “People lie, number don’t,” says Charlie, the main character of the show.

I often use numbers to gain insight into pharmaceutical marketing issues. For example, all the hew and cry about too much risk in DTC ads (included print ads) — see, for example, “WLF: A No-Risk Ad is a Good Ad,” “DTC without the Risk,” and “Marketing ‘Acceptable Risk’” — shouts out for a quantitative analysis of how much space is allocated to risk vs. benefit information in print DTC ads. What are the numbers saying?

Well, you’ll have to read the article “Print DTC: How Does It Measure Up?” to find out. [Reprint fee or Free Subscription required.]

But what can we learn from these numbers other than the fact that most of us are not sharing in the wealth?

That’s surprising because publications are reaping DTC advertising rewards from the pharmaceutical industry this year (see “Pharma eMarketing in a Slump“). Maybe the ads just sell themselves and talented marketing execs are not needed. Success breeds contempt!

In contrast, Peter Rost, whose new book “WHISTLEBLOWER: Confessions of a Healthcare Hitman” is reviewed in the September issue of Pharma Marketing News (click here), claims his Pfizer salary was $600,000 when he was VP of Marketing at Pfizer. 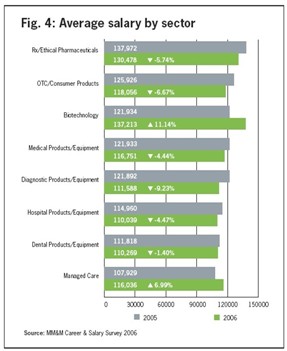 Biotech on the Rise?
According to the MM&M survey, salaries in the biotechnology sector (chart on left; third pair of bars from top) are now higher than those in the Rx sector (chart; top). In fact, it’s the only sector in which salaries have increased over the past year.

What are these numbers saying?

I think that biotech is really gearing up to market their products heavy duty style and they may be draining the marketing brains from the Rx sector, which is currently demoralized by mergers and management changes.

This trend is evident at PhRMA, the industry’s trade association, which just announced that Kevin Sharer, president, CEO and chairman of Amgen, the world’s largest biotechnology company, became chairman of the board upon the resignation of Peter R. Dolan of Bristol-Myers Squibb. Peter, you recall, was ousted from BMS recently (see “Another Pharma CEO Bites the Dust!“).

The numbers don’t lie: expect much more biotech marketing in the years ahead. If nothing else, these VPs have to justify their salaries!

Time for Pharma to Revamp Its Physician Marketing Strategy