Alex Butler, Digital Strategy and Social Media Manager at Janssen and candidate for the Pharmaguy Social Media Pioneer Award, just informed me by email that he and his team have launched the Psoriasis 360 Facebook page, which is part of a larger disease-awareness campaign.

“The Psoriasis 360 campaign has been developed by Janssen as part of an ongoing commitment to improving the lives of patients through the provision of useful and relevant information about psoriasis. We know that people who live with psoriasis don’t always get the help and support they need to manage their condition. Many people are not aware how severe their psoriasis is, the impact that this has on their life and how to speak to their doctor about managing the condition.

“This information forms the core of the content on the psoriasis 360 website. We would like people to join our community on Facebook and share their experiences with ourselves and others. They can also connect with us and follow the latest psoriasis and 360 community news on twitter. Shortly there will also be a YouTube channel that has been set up with the primary goal of YouTube itself in mind-letting people touched by the condition broadcast themselves and share their stories with others, helping people to live better with psoriasis.

“We believe strongly that people should be able to share their views in an open a manner as possible for a regulated industry and the commenting policy reflects this attitude.”

I think this pharma social media site is the first to publish ALL comments BEFORE they are reviewed. Janssen, however, reserves the right to remove any comments “if they directly talk about medication or could be offensive to people.”

Of course, this leaves the door open for Janssen and/or their agency partners to post all kinds of links to information that Janssen MAY endorse and be responsible for under other circumstances.

But let’s not put the cart before the horse and start criticizing this policy before we see more “conversations” on the site.

Speaking of “conversations,” I will be interviewing Doc Searls, one of the authors of the Cluetrain Manifesto, about the relevance of the Manifesto for the pharmaceutical industry in today’s social media world.

According to the ClueTrain Manifesto “A powerful global conversation has begun. Through the Internet, people are discovering and inventing new ways to share relevant knowledge with blinding speed. As a direct result, markets are getting smarter—and getting smarter faster than most companies.”

The first 6 theses of the Manifesto state:

I’m most interested, however, in latter theses that are relevant to the growing list of pharmaceutical Facebook pages; namely “The ideal, according to the manifesto,” as reported in wikipedia, “is for the networked marketplace to be connected to the networked intranet so that full communication can exist between those within the marketplace and those within the company itself (thesis 53.) Achieving this level of communication is hindered by the imposition of ‘command and control’ structures (thesis 54-58) but, ultimately, organizations will need to allow this level of communication to exist as the new marketplace will no longer respond to the mass-media ‘voice’ of the organization (theses 59-71).”

Therefore, I made this post today to the Psoriasis 360 FB Wall:

“Good luck on your new FB page. A piece of advice I’d like to see implemented is for the Janssen people who are responsible for this FB page AND for the ppl who are part of the psoriasis team at Janssen to perhaps identify themselves and/or post their photos to the site. I know this is sometimes a problem because of pri…vacy issues, but eventually the general public would like to know who they are talking to. Having replies come from REAL identifiable ppl may help generate discussion better than having replies come from ‘Psoriasis 360.’ What do you think?”

Until pharma can break down the “command and control” structure within its marketing organization and allow voices from real people within the organization to respond to consumers, it will never achieve the vision of the ClueTrain Manifesto.

The Relevance of the Cluetrain Manifesto in a Social Media WorldWhat’s Still Not “Conversational” in Today’s Markets? 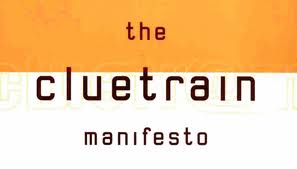 A conversation with Doc Searls, Senior Editor of Linux Journal and co-author of The Cluetrain Manifesto, about the relevance of the Manifesto for the pharmaceutical industry in today’s social media world. Doc will preview the keynote presentation he plans to make at the upcoming Digital Pharma East conference. (See guest bio.)