“An investigation by Consumer Reports, which included interviews with doctors and patients and an analysis of medical research and a device-safety database maintained by the FDA, shows the following areas of concern: 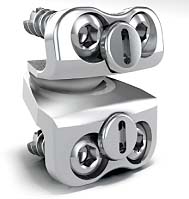 According to Consumer Reports, the majority of medical implants are not tested to make sure they are safe. Most of the time device manufacturers only need to pay the Food and Drug Administration (FDA) a fee of about $4,000 with minimal testing in order to get approval for marketing. Compared to drug approval, this is a walk in the park.

Not only is the approval of medical devices by FDA more lax than the process used to approve drugs, medical device marketing is worlds apart from Rx drug marketing as I learned from a presentation made by a Medtronic marketing VP. The presentation focused on a case study of a marketing campaign for the Prestige Cervical Disc.

That case study showed that out of an estimated 5 million spine surgery candidates (patients) in the US, Medtronic only needed to capture 125 of them to break even on a very successful marketing campaign that reached 6.2 million local TV viewers, 80.5 million radio (especially satellite radio) listeners, 4 million print readers, and 73 million Internet browsers. (Get more details about that case study by downloading this Pharma Marketing News article: “Medical Device Marketing: Worlds Apart from Rx Drug Marketing“; use discount code ‘DEV444‘ BEFORE April 15, 2012 to get it FREE!).

While drug advertisers would sweat and moan over whether such a campaign would have a positive ROI (return on investment), medical device marketers
don’t need to worry about no stinkin’ ROI because of such low numbers of conversions required AND also because very little resources need to go into premarket testing in order to get FDA approval.

Although the FDA has met most of its goals for fast-track medical device approvals, it’s taking substantially longer to issue decisions on devices than it used to, concluded a report from the Government Accountability Office (GAO). The GAO said:

“FDA has begun to take steps to address GAO’s 2009 recommendation about
high-risk devices that are allowed to enter the U.S. market through the less
stringent 510(k) process, but progress has been limited. High-risk devices
include those which are implantable or life sustaining. In 2009, GAO
recommended that FDA expeditiously take steps to issue regulations for the
device types classified as high risk that are currently allowed to enter the
market via the 510(k) process. Since then, FDA has set strategic goals to
address these device types, but has issued a final rule regarding the
classification of only one device type. As of April 1, 2011, FDA’s action on the
26 remaining types of high-risk devices was incomplete. Thus, these types of
devices—such as automated external defibrillators and implantable hip
joints—can still enter the U.S. market through the less stringent 510(k)
process. GAO found that, since its report was issued in January 2009, FDA has
cleared at least 67 510(k) submissions that fall within these high-risk device
types. FDA has taken some additional steps to enhance premarket device
safety since GAO’s 2009 report was issued—for example, it commissioned the
Institute of Medicine to conduct an independent review of the premarket
review process—but it is too early to tell whether any forthcoming changes
will enhance public health.”

To get a copy of the GAO report, see the end of this post: “FDA Taking Longer to Approve Medical Devices, Says GAO“