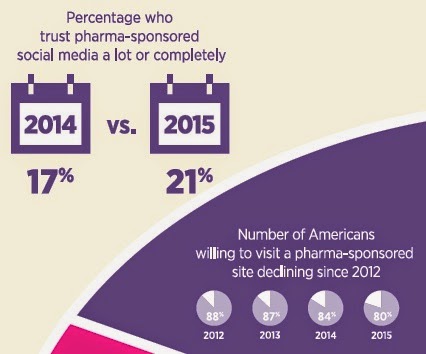 According to findings released today from the Fifth Annual Makovsky/Kelton “Pulse of Online Health” Survey, the percentage of Americans who trust pharma-sponsored social media “a lot” or “completely” increased from 17% in 2014 to 21% in 2015.

The same survey also revealed another trend: In 2010, 88% of Americans were willing to visit a pharma-sponsored Web site (e.g., a drug.com site), whereas in 2015 that percentage decreased to 80%.

Fielded in January 2015 to 1,015 nationally representative Americans ages 18 and older by Kelton, the Makovsky Health survey investigated consumers’ behavior and preferences for engaging with online healthcare information. The margin of error is +/- 3.1 percentage points at the 95 percent confidence level.

Meanwhile, a Prevention Magazine 2011 survey found that 49 percent of respondents who went online for prescription drug information reported seeking this information on a specific brand’s Web site. As a consequence of this influence of the Internet, FDA is currently studying how consumers interact with drug.com websites (read this Pharma Marketing News article: Are Drug.com Websites “Fair and Balanced?”).

Before commenting on the above results, let me summarize a few other “Pulse of Online Health” Survey results — especially those related to mobile and wearable devices — that may be of interest to you.

According to the survey results, almost two-thirds (66%) of Americans would use a mobile app to manage health-related issues. Millennials — the children of “Baby Boomers” — are leading the digital health charge, as they are more than twice as likely to express interest in using a mobile app to manage their health compared to their parents (Baby Boomers aged 66 and older).

Mundane mHealth Apps Favored
It seems, however, that Americans are interested in the more mundane uses of mobile health apps such as:

Similar results were found for uses of wearable devices.

Speaking of wearable devices, the Apple Watch, which is is expected to debut in April, may not include a few of its much-anticipated, non-mundane health features such as sensors that track stress by measuring the conductivity of skin and an electrocardiogram feature that measures a user’s heart rate. It turns out that the sensors “didn’t work well on people with hairy arms or dry skin, and the watch underperformed on people who fastened it to their wrists too loosely.” Also, the watch provided “inconsistent results from blood-pressure and blood-oxygen-level tracking technology” (read the story here). So, Apple decided to go with a more mundane pulse-monitoring feature.

OK, exciting mHealth Apps are difficult to develop for imperfect humans. Also, don’t forget that if a wearable such as the Apple Watch is used to offer health or behavior advice, it may require approval from the FDA.

Let’s get back to the results regarding pharma social media vs. drug.com sites.

According to the press release:

Of the 80 percent of Americans willing to visit a pharma-sponsored website, those 66 and older were more likely to visit the site if a healthcare professional recommended it (52%). Doctor recommendation matters less to Millennials, with 41 percent visiting a site based on physician suggestion, and Millennials are also 23 percent more likely to be motivated by an advertisement to visit a pharma-sponsored website than those 66 and older.

When the press release says “23 percent more likely” than X, it means X + 23 percentage points higher. That’s a significant difference in terms of being influenced by advertising. Who knew that our kids even noticed ads let alone are influenced by them!

I don’t have the actual percentage of Americans who are motivated to visit drug.com websites by commercials. I’ll ask about that when I interview the appropriate person(s) from Makovsky/Kelton.

When it comes to social media, Millennials are 25 percent more likely to trust a pharma-sponsored platform than those 66 and older (31% vs. 6%). There’s another big difference!

Social media lacks authority with the general population as 79 percent of respondents reported they trust these channels either “a little bit” or “not at all.” Patients with a diagnosed chronic medical condition, however, report “complete trust” in these channels at nearly double the rate of the average population.

Given the trust (or gullibility, depending on your POV) of Millennials in pharma-sponsored ads and social media, it’s a shame not many of them have use for the products that pharma sells — not yet, any way. Perhaps the pharmaceutical industry will begin focusing more on “engaging” with Millennials in a non-branded way to establish long-term “relationships.” And perhaps stop advertising to geezers on the nightly TV news programs and to hypochondriacs during the daytime! Or maybe not.

Nasonex Bee May Usher In a Whole New Way to do...