According to the 2014 U.S. Mobile App Report by Comscore, U.S. digital consumers now spend more time using mobile apps than they do  on desktop computers (see chart below). 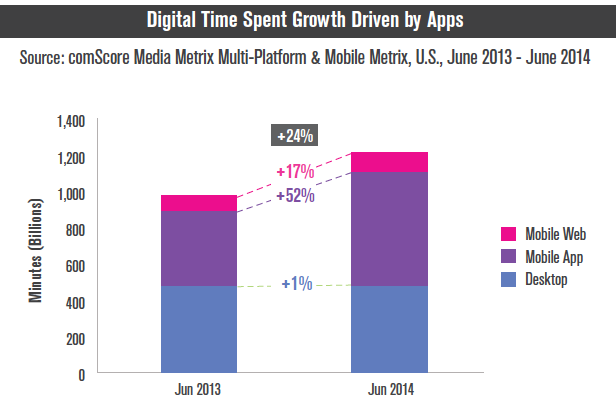 “Total U.S. digital media time spent has jumped 24 percent in the past year, driven by a surge in mobile app usage, which increased 52 percent,” noted the report.

“While mobile usage has been growing fast, it has not come at the expense of desktop computer usage, which still managed to grow by 1 percent. Apps drive the vast majority of media consumption activity on mobile devices, accounting for approximately 7 out of every 8 minutes.”

Despite this, mobile apps have not been attracting the dollars its audience warrants, says Comscore. I know of one pharma company, however, that has cleverly and successfully promoted one of its drugs via a mobile app.

That company is Astellas, which partnered with RunPee, a movie-viewing mobile app that tells users the best time to “run and pee” without missing the best scenes, to deliver highly effective ads for Myrbetriq, a treatment for over-active bladder.

The campaign integrated in-cinema advertising that promoted the mobile app, the app itself — which appealed to an appropriate audience at an appropriate time — and an interstitial ad that drove viewers to a mobile-optimized product information Web site. Listen to this 3.5-minute audio snippet from an Pharma Marketing Talk interview of Walt Johnston, Vice President of US Marketing and New Product Planning, and Emily Sitrin Mason, Consumer Marketing Director – Urology Franchise, at Astellas:

Not all smartphone users, however, download apps every month, although an astonishing one-third download one or more apps per month as shown in the following chart from the report: 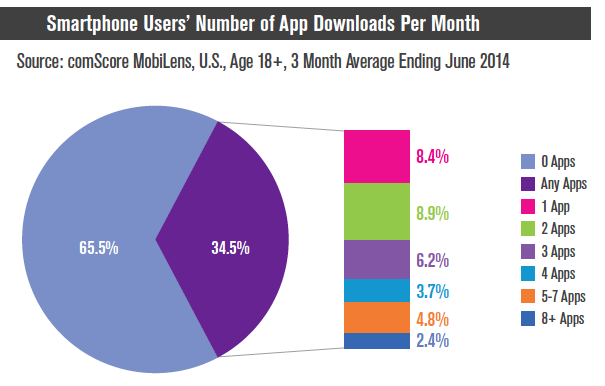 Naysayers might focus on the two-thirds of smartphone users who do NOT download any apps. From that perspective, it’s clear that pharma marketers should probably not waste their time (and money) developing apps and then expect smartphone users to download them — not unless they have an approach similar to Astella’s, which incentivized a targeted and receptive audience to download the app and not unless the app meets an unmet need. In other words, market your apps like you do for your end product.

Some other mobile advertising data you might be interested in comes from a recent eMarketer Mobile Ad Effectiveness webinar.

There are various types of mobile ads as shown in the following table, which ranks them according to effectiveness (based on a limited number of interviews):

Some types of mobile ads are much more effective than others in terms of click through rates (CTRs) and ALL are much better than web banner ads.

If you are a pharma marketer who has used mobile advertising, I am interested in hearing more about your experience. Email me at pharmaguy@pharmaguy.com