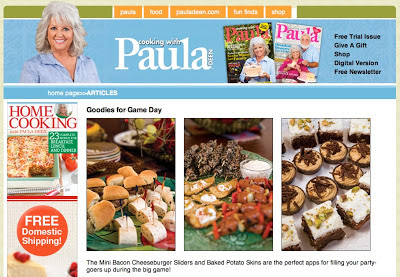 Novo Nordisk’s diabetes drug marketers are hitching on to the Super Bowl bandwagon. This morning, for example, I received an e-mail from Novo Nordisk’s “Cornerstone4Care” program with the subject line “Delicious Big Game snacking for those with diabetes.” I must have signed up for this e-mail list when I reviewed the “Diabetes and You” iBook published by Novo (see “Pharma ‘eBooks’: Imagining what COULD be, not what IS“).

“The traditional Big Game party is usually a down-to-earth, unpretentious affair, with everyone rooting for their favorite team and enjoying snacks that are easy to serve and eat,” said Novo in the e-mail message. “Of course, many of those snacks are unhealthy for everybody, let alone for the many people like my patients who live with diabetes.”

The banner above this sensible message, however, piqued my interest: “Why this year’s Big Game party needn’t cramp your (diet) style.” Which led me to believe I would find some low-carb, low-fat TRADITIONAL Super Bowl recipes if I clicked through to the site. So I did. This is the image that greeted me on the site’s home screen: 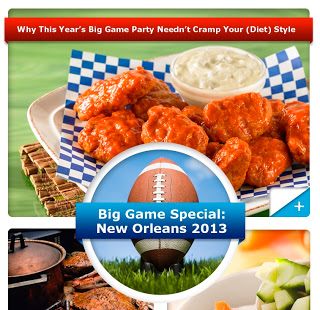 Those BBQ nuggets and dip looked very tempting, so I took the “BAIT” and clicked on the little “+” sign expecting to find the anticipated lo-cal, lo-fat recipe for this traditional-looking Super Bowl dish. Instead, I found this, which I believe is called the “SWITCH” in marketing “Bait-and-Switch” scams: 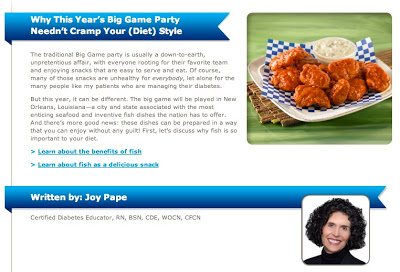 Despite the photo of juicy BBQs wings on this screen, there was no recipe for that, just for fish — and NOT the breaded, deep-fried variety as in fish and chips. I’m talking about healthy fish dishes such as Light canned tuna, salmon, Atlantic and Pacific mackerel, herring, and — no kidding — anchovies!

OK, fool me once, shame on you! But Novo fooled me twice! An annoying feature of this site is the pop-up when you accidentally mouse over the “Related Novo Nordisk Sites” option at the top of the screen:

All of a sudden, what was an educational, unbranded disease awareness site, is now shown to be a pitch for Novo’s branded diabetes products. I’m OK with that little “switch,” but I was really annoyed when I realized how difficult it was to close that pop-up and get back to the unbranded stuff without seeing ads for products. Novo is using some kind of technology — probably Adobe Flash — to make this pop-up have a life of its own and difficult to get rid of. Grrrrr!!!

Interestingly, the “Non-Insulin Therapy” option opens a screen about Victoza, the therapy having the famous southern chef Paula Deen as the spokesperson (see, for example, “Novo Nordisk Defends Choice of Paula Deen Over Anthony Bourdain (for example) as Celebrity Chef Spokesperson“). I was curious as to what Super Bowl recipes from Paula I would find on the Victoza site. Unfortunately, the Victoza marketing team is still focused on New Year’s recipes and not Super Bowl recipes.

But I was sure that Deen’s alter ego (i.e., non-Victoza spokesperson for her “Cooking with Paula” franchise; see here) would have plenty of Super Bowl recipes. Sure enough, there was no “Bait-and-Switch” here:

Obviously, these recipes are not for people with diabetes, who must be satisfied with steamed fish on Sunday instead!