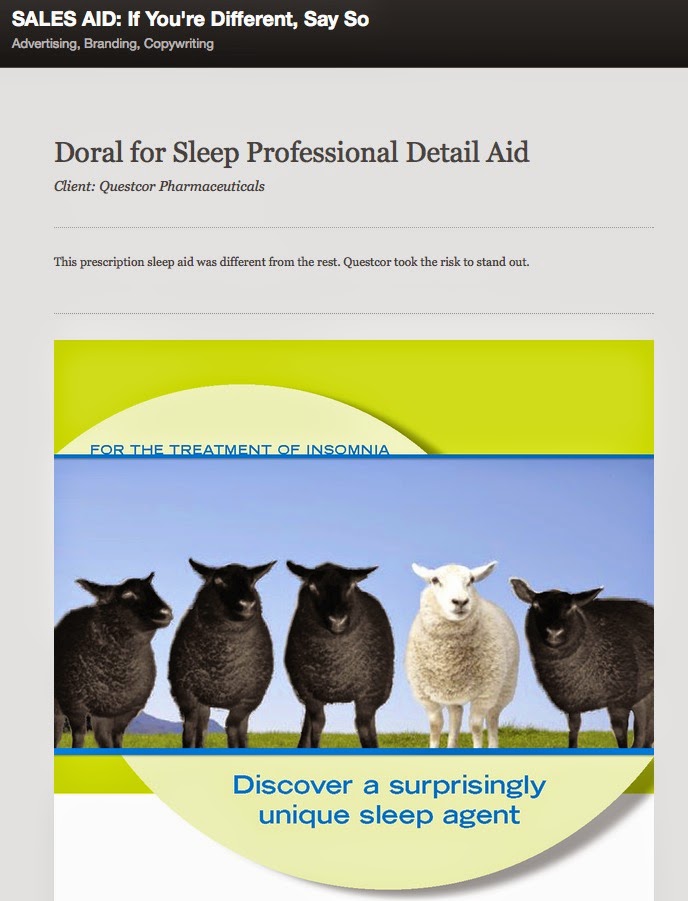 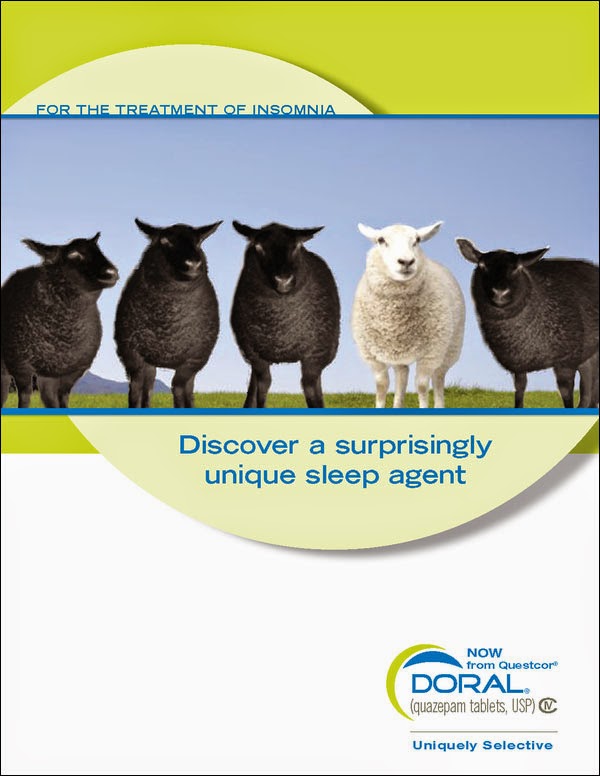 The letter took issue with the company’s sales material promoting Doral (quazepam), a drug approved by FDA for the treatment of insomnia.

None of these is that “unusual” for problems cited in so-called “Notice of Violation” (NOV) letters. For example, 43% of such letters cite omission of risk information, and another 43% cite overstated efficacy, unsubstantiated superiority claims, and broaden indication (for more on that, read “Do TV DTC Ads Overstate Rx Drug Risks?“).

Under “Unsubstantiated Superiority Claims” the FDA humorously refers to the “Image of a single white sheep among a group of four black sheep” on the sales aid cover (see image). More on the agency that designed this sales aid later.

But it wasn’t the sheep reference that made this letter “unusual” in Alex’s eyes. So what did Alex find so unusual about the Doral letter?

Alex said: “The problem, FDA said, is that the drug hasn’t been shown to be any safer or more effective than other approved treatments for insomnia, despite its ‘unique mechanism of action,’ which OPDP notes ‘had not been demonstrated by substantial evidence.’ The key word there is ‘substantial.’ While evidence of this claim was provided, FDA disputed the accuracy of those sources—an unusual action for the regulator.”

You can read Alex’s article for the details. But I found something else “unusual” about this letter.

“We acknowledge that the sales aid includes the statement, ‘Please see accompanying full prescribing information‘ on the bottom of page four; however, this does not mitigate the omission of the aforementioned risk information. By omitting serious and common risks associated with the drug, the sales aid misleadingly suggests that Doral is safer than has been demonstrated.”

LOL! The Sciecure Pharma marketers and/or their agency were attempting to use the discredited “one-click rule” to prevent messing up its beautiful sales aid with all that ugly risk information! Recall that pharma marketers tried using the “one-click rule” to justify why no risk information was included in search ads and tweets (see, for example, “The Girl from Google“). But using the tactic in a 4-page print piece where you have plenty of room? Shameful!

Any way, what ad agency created this sales aid? I believe it was DDB San Francisco. How do I know that? It turns out that a DDB Copy Supervisor posted images from the sales aid on Behance where I found it via a Google search. The post was titled “SALES AID: If You’re Different, Say So.” The subtitle: “This prescription sleep aid was different from the rest. Questcor took the risk to stand out.” To which I say, you also better cite better evidence to convince the FDA that you are different.

Since this page may be deleted by the time you read this, I have captured the screen (see image below):

Pharma Even More Digitally Feeble When it Comes to Healthcare Providers!