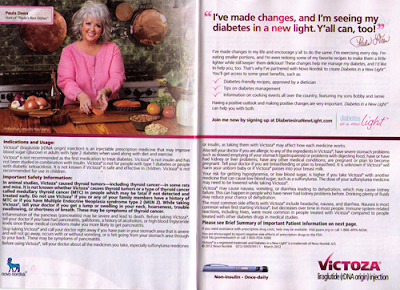 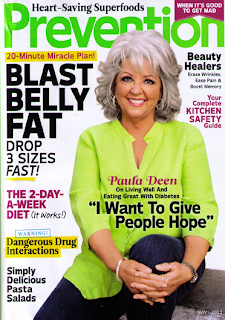 Paula Deen, the TV celebrity southern-style chef and spokesperson for Novo Nordisk’s diabetes treatment Victoza (see “Novo Nordisk Defends Choice of Paula Deen Over Anthony Bourdain (for example) as Celebrity Chef Spokesperson“), recounted for Prevention Magazine how she learned she had type 2 diabetes. Deen is featured on the cover of the May 2012 issue of Prevention (see cover on left).

When asked “How high was that blood sugar reading?” during a routine doctor visit more than 3 years ago, Deen said “I don’t know. They just said it was high.” Then her doctor said, “I’m going to start you on some medicine,” and wham, bam, thank y’all ma’am, Deen started her secret life as a diabetic.

Furthermore, Deen does not remember her doctor saying anything about lifestyle changes. “Now, she might have,” said Deen diplomatically, “but I don’t recall coming out of that visit with a lot of literature. She just started me on the drug.”

It’s hard to believe any doctor worthy of treating a wealthy celebrity would not have given her a bit more education regarding living with diabetes. One important bit of education is “Know Your Blood Sugar Levels.” That’s the title of a National Institutes of Health National Diabetes Education Program pamphlet (see here). “If you have diabetes,” says NIH, “keeping your blood glucose (sugar) numbers in your target range can help you feel good today and stay healthy in the future.”

After Novo Nordisk approached her to be a spokesperson, Deen “asked the doctor if I could switch over from the [combo drug]” to Victoza. Of course, her doctor complied because Deen knows best, although she doesn’t know her numbers (or choses not to say what they are). Or perhaps the doctor was also “approached” by Novo Nordisk.

Whatever! Deen is now taking not only Victoza but also metformin and “a small dose of Actos.” I’m not an expert on diabetes treatments, but because Deen is on multiple drugs and because she hasn’t revealed her initial high blood glucose reading, we will never know if Victoza is really helping her control her diabetes.

Deen has the right to keep her blood glucose levels and other medical information confidential. She also has the right not to reveal how much money Novo Nordisk is paying her. “I am being compensated for my time and work,” said Deen.

BTW, there seems to be a pattern of pharmaceutical celebrity spokespeople defending themselves in consumer magazines like Prevention. Mickelson, for example, “opened up” in an interview published in Arthritis Today (see “Phil Mickelson ‘Opens Up” to Arthritis Today Magazine“).

Of course, these magazines also make a lot of money from drug advertising. In fact, there is a nice 2-page ad spread for Victoza featuring Paula Deen in the same issue of Prevention as her less than “tell all” interview. In the ad, Deen is NOT depicted creating her famous bacon, cheeseburger, Krsipy Creme donut sandwich! (See the video of THAT here).

In a recent survey, I asked respondents to say whether they agreed or disagreed with the following statement: “Each pharmaceutical company should be required by law to publicly disclose how much money it pays every celebrity for being a spokesperson.” 38% (N=112) said they “strongly agreed, ” another 21% said the “somewhat agreed,” and 36% said they strongly or somewhat disagreed.

One pharmaceutical company employee respondent made this comment: “What is the point of all this pharma reporting? If I tell you that Paula Deen is making $10M or $1M, what difference does it make? I’m sure she’s making a lot of money. But that is driven by her market worth and the specifics of the contract (length of contract, number of events, etc.). There’s no realistic way for the public to understand (or care about) that context. So what is the point?”

Full results of the survey will be published in the upcoming April issue of Pharma Marketing News. Subscribe now to get it free!

When It Comes to Privacy, Purdue Is as Old-fashioned as an...