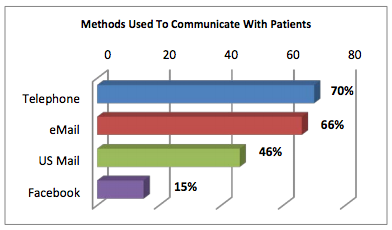 The third edition of “What Physicians Want!,” a biennial survey conducted by Publicis Touchpoint Solutions and Sermo, offers evidence that tech-savvy physicians are not embracing social media to communicate with patients. The survey questioned more than 250 Sermo physicians, sixty-two percent of whom were primary care providers (FP, IM, Ped), while the remaining 38% comprised more than 20 surgical and nonsurgical specialties.

Only 19% of the surveyed physicians use Twitter. That compares with 22% of respondents to the 2010 survey. These physicians, however, are flocking to LinkedIn, Facebook, and Google+ for personal and professional use (see chart below). LinkedIn showed rapid growth in users, from 18% in 2010 to 40% in this year’s survey. Google+ is surging quickly, with 38% using this site. 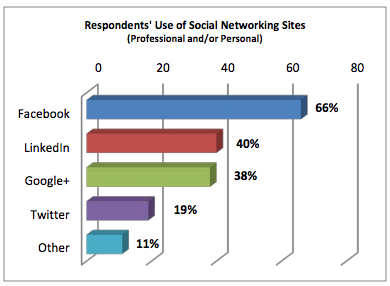 Given that these are tech-savvy registered SERMO physicians, I would have expected them to be more interested in using social media to communicate with patients. There are obvious privacy and other issues involved. The American Medical Association (AMA) warns physicians that “Social networks, blogs, and other forms of communication online … create new challenges to the patient-physician relationship” (see “AMA Policy on Use of Social Media Sees the Glass Half Empty“).

Despite such concerns, physicians use email to communicate with patients. Why not social media like Twitter and Facebook? Both allow private messaging between parties. I don’t expect a lot of physicians to do this, but I expected to see a trend in that direction. These surveys, however, reveal no such trend.

One trend that the survey DOES clearly show is physician interest in iPads! 82% of survey respondents want to
see “more” or “significantly more” use of iPads or other tablets by pharma representatives calling on their practices.
Over half of the survey respondents (54%) are using iPads/tablets for personal and/or professional use. And of the 46% who don’t yet
use tablets, nearly three-quarters plan to use one for personal and/or professional use in the near future.

Perhaps with the NEW iPads, more physicians will communicate with some of their patients via FaceTime — a nifty Skype-like app that allows you to talk to and view friends, colleagues, patients.

You can read more about this survey as well as download a white paper summarizing all the results here: New Survey: Physicians Ask Pharma, Help Me, Help My Patients

Avandia and Janet Woodcock, the Next FDA Commissioner