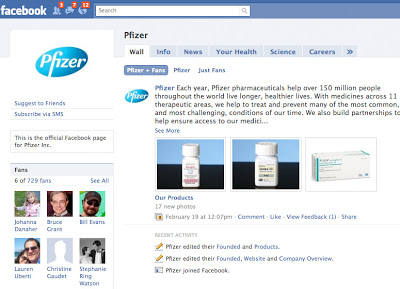 Yesterday afternoon at approximately 3 PM ET, @pfizer_news posted this tweet: “Become a Fan of Pfizers official page on Facebook: http://bit.ly/aGX49f” About an hour later I was sent this DM: ‘Hi – Wanted to let you know that we just launched our official Pfizer Facebook page (http://bit.ly/aGX49f)… hope to see you there!”

I always make it my business to explore as many new pharma social media initiatives as possible. Therefore, I immediately logged on to Facebook and became a fan of Pfizer’s official Facebook page. I was not the first fan. Despite having just been launched within the last 24 hours (I believe), Pfizer now has over 800 Facebook fans. The @Pfizer_news Twitter account now has over 5,000 followers!

When I became a Pfizer FB Pfan, Pfizer’s Wall contained a bunch of short “medicine Safety” videos in which patients talked about their medical conditions and medications. I don’t think any mentioned specific products by name.

One video was of a woman with osteoarthritis who expressed concerns about taking any medication at all. I thought this was an interesting video for Pfizer to post to its wall. So I decide to post a comment about it. However, “something went wrong” when I hit the submit button, as shown in this screen capture: 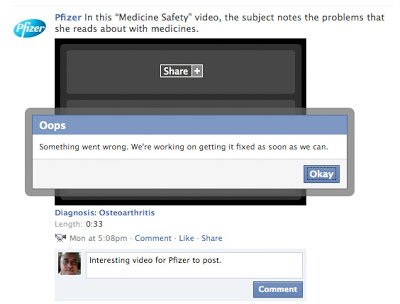 I didn’t really think that Pfizer would allow comments, so this didn’t surprise me. Maybe they are actually “fixing” this “problem.” We’ll see.

But I WAS able to SHARE this video by posting it to MY profile so that all MY FB friends could see it too! This is how it looked on my FB profile page (www.facebook.com/pharmaguy) a few minutes after I shared: 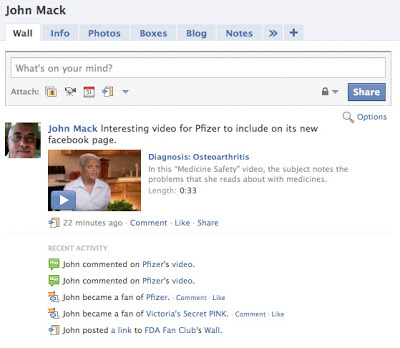 Today, however, those videos are gone and you cannot see the one I tagged on my FB profile page. They were replaced by product photos as shown in this screen capture:

Is this a classic “bait and switch” strategy? Pfizer enticed me to become a fan, which I did based on the interesting unbranded video clips. Then it switched to what it knows best: brand marketing.

Who wants to be a fan of a pharma Facebook account that only talks about its products? Not me. Hopefully, Pfizer is just experimenting and eventually it will come up with a more compelling reason for me and others to be a fan. Meanwhile, the fans keep coming. I guess you can fool most of the people some of the time!

UPDATE (March 1, 2010): It appears that the videos are back up on Pfizer’s Facebook page. You can share them (ie, post them to your Facebook profile), but you cannot submit comments on Pfizer’s Facebook page. I guess that Pfizer saw that there was a comment button that lead to an error and they fixed it by eliminating the comment buttons. When I first wrote about this, a colleague thought that the videos were removed because you could share them on your profile and then all your friends could attach comments to them. It was thought that this “unauthorized” content attached to the videos would get Pfizer into trouble with the FDA. Probably not, IMHO.