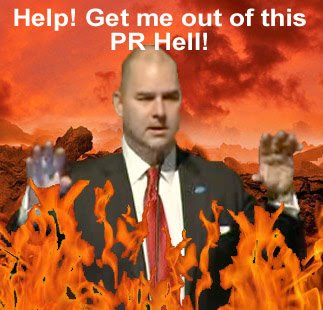 Over the past 20 months, Pfizer’s global PR chief, Ray Kerins re-organized the company’s press relations office to “manage” journalists, according to this 3-minute Ad Age video. [Hat tip to PharmaGossip.]

“I blame myself and those of us in the industry for the bad reputation that the pharmaceutical industry has,” said Kerins during a conference presentation.

Kerins finds it incredible that despite making products designed to save lives and cure diseases, the drug industry enjoys such low esteem among the public. “How in the hell do we have such a bad reputation?” was his way of expressing it. “It makes no sense.”

Well, he doesn’t answer that question directly — at least not in this short video clip — although he blames pharma PR people for not wining and dining journalists enough, which is traditionally what PR is all about.

“Our core strategy,” Kerins says, is “engage and educate,” which can be loosely translated to “free lunch and schmooze,” the same strategy that has worked so well in marketing to physicians.

“In fact,” Kerins said, “we are hosting a lunch with the communications team for Linda Johnson, who is one of the top health care folks at the Associated Press. She’s outstanding, she’s brilliant, we love her to death.” Jeez, get a room already!

I don’t know much about Linda Johnson and her general take on the pharmaceutical industry. I’ve read just a few of her articles about Pfizer — eg, “Pfizer to buy Wyeth for $68B; cut 8,000 jobs” — which seems fairly balanced. But she is no Ed Silverman, former reporter and blogger with the Newark Star Ledger.

In 2008 Pfizer brought in approximately 215 journalists. They even invited bloggers like me to come in. I didn’t hear anything about a free lunch, so I blew them off (see “Chantix ‘Roundtable’ Apparently Not Round and Not a Table“). “The meeting, which lasted about 90 minutes, was largely uneventful, in so far as three Pfizer execs sat at a table in front of approximately 30 journalists and analysts,” said Ed Silverman.

Kerins — true to his commitment to engage journalists (and bloggers it seems) — posted this followup to me in a comment: “Based on the poem that you posted last week [here], we know that you were anxious to attend our media roundtable today. We’re sorry that you couldn’t make it. Would be happy to set up some time with you to speak with some of our medical and safety folks to address your questions.”

My bad for not taking him up on that offer, which I hope I can take advantage of in the future when another PR fire needs to be put out.

I don’t know too much about corporate communications and PR at pharmaceutical companies except from what I have learned from Marc Monseau and Michael Parks. Monseau works at Johnson & Johnson and writes a blog to help him educate journalists (see JNJ BTW). Michael Parks, used to work for Centocor and also wrote a blog, which is now defunct.

But back to why pharma has such a bad reputation. It’s not something that can easily be fixed by “engaging and educating” journalists.

Speaking as a consumer — the end user of pharmaceutical products — I say that pharma doesn’t do enough to “engage and educate” me. More than that, I hate to see that some people cannot afford drugs and I hate it when pharma tries to keep drug prices high — as, for example, when it prevented Medicare from being able to negotiate prices as part of the Part D program.

Pharma needs to give some free lunches to us consumers — more discounts on co-pays, for example. Expand its Patient Assistance Programs to include unemployed people. That sort of thing.

In other words, do more to help Americans get through these harsh economic times and THEN wine and dine the journalists — better yet, blog about it!