eMarketing is a challenge for the pharmaceutical industry. It is estimated that the percent of the pharmaceutical marketing budget spent in the “e” space has remained at or below 5% since the dawn of the commercial Internet! (See “The Marketing Mix Maze” for numbers and estimates; compare to numbers below.)

According to an August, 2006 report by eMarketer (“Pharmaceuticals Online: Direct-to-Patient Becomes a Reality”):

The 13 major pharmaceutical companies spent $170.1 million in
measured online advertising in 2005, or 2.6% of their measured
media spending, according to Advertising Age/TNS data. Taking
“unmeasured” media into account, that share falls to just 1.23% of
the total advertising budget estimated by Advertising Age. Online
advertising by these companies dropped 15.1% in 2005, a much
steeper decline than the slight drop in overall ad spending that
year. Still, TNS does not include search advertising in its online
measurement, which is a tactic of major importance to
pharmaceutical companies, and could easily account for an
additional 40% of prescription drug online advertising.

Yet, while total DTC spending is up about 6.6% this year compared to last year (according to TNS Media Intelligence), online spending by pharma marketers dropped almost 3%.

Not only is this contrary to what pharmaceutical marketing experts expected (see, for example, “Pharma eMarketing at Tipping Point?“), it bucks the general trend across all industries, which increased their online ad spending by about 18% (see “TNS MEDIA INTELLIGENCE REPORTS U.S. ADVERTISING MARKET GREW 4.1 PERCENT IN FIRST HALF OF 2006“). That is, the pharma industry has increased its overall marketing to consumers more than the industry average (6.6% vs. 4.1%) while decreasing its online marketing spend.

Since TNS numbers do not include search marketing, we cannot be sure what the trend in overall online pharma marketing has been. My guess is that search spending by pharma may have remained constant. In that case, total online spending by pharma (display ads, search, et al) still decreased by almost 3%. 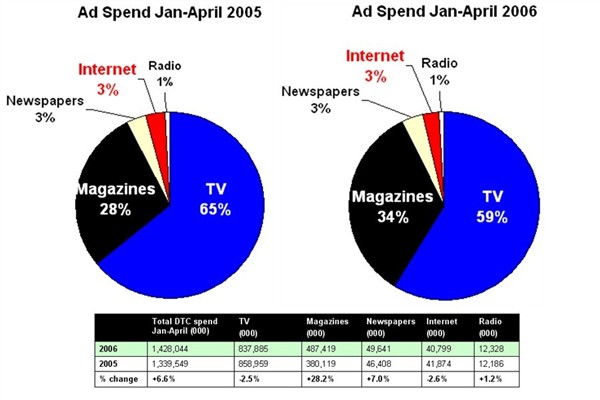 While search is important, it’s the final destination that counts for traditional advertisers. If less money is being spent delevoping those final destinations with their calls to action, then that indicates a rejection by pharma of online marketing’s potential.

eMarketer had predicted that US pharmaceutical online spending would increase 25% in 2006 to reach $780 million. That doesn’t look likely now.

Less TV, More Print
Back in 2005, many experts predicted that the pharmaceutical industry would spend less on TV advertising and divert some of that money to online (see, for example, “Pull Back from DTC on TV?“). While pharma did indeed decrease TV ad spend by 2.5%, all of that money — AND MUCH MORE — went to print advertising (magazines and newspapers; see chart above).

These numbers focus on advertising and marketing to consumers. I suspect the same trends apply to physician marketing — ie, big increase in journal advertising, decrease in online promotion.

Taking Lunesta and Ambien Out of the Equation
If you eliminate the $122,801,000 that Sepracor spent on Lunesta DTC in 2006 (it spend $0 in the same period in 2005) and the additional $46,206,000 that Sanofi-Aventis spent on Ambien DTC to catch up, overal DTC spending would have decreased by 6% instead of increased!

eDetailing in a Rut Too?
Regarding eDetailing, which has been touted as the 800-lb online physician promotion gorilla, I’ve heard the following from a knowledgeable source:

“It seems edetailing is in a ‘rut’ lately. Lack of enthusiasm, a number of clients with mixed or lackluster results…”

I’d say online pharmaceutical marketing is in a rut across the board these days!

Can’t Get Any Respect!