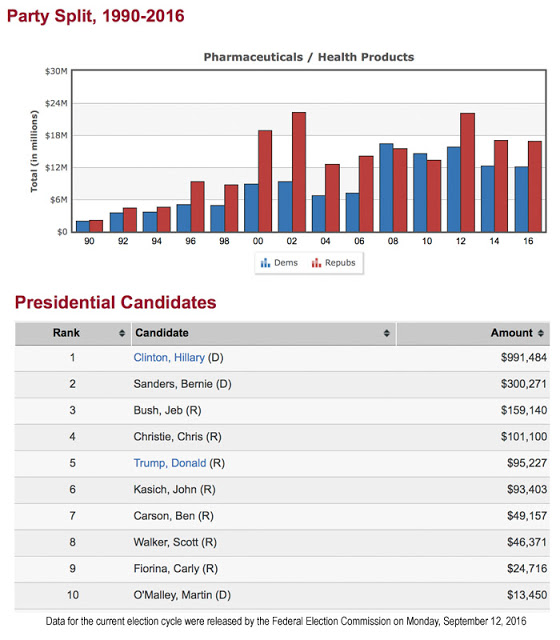 According to the latest data from the Federal Election Commission released on Monday, September 12, 2016 (here), Hilary Clinton has received more than $990,000 in funds from the healthcare/pharma industry although the industry has donated nearly 50% more money to Republican presidential candidates than to Democratic candidates.

Apparently, Trump doesn’t need no stinkin’ money from pharma, which only gave him about $95K. Does that mean that Trump will come out swinging harder at pharma during tonight’s presidential debate than will Clinton?

STATnews has posted a series of questions that the debate moderator should ask the candidates (see here). One involves drug prices:

“You two share one thing when it comes to soaring drugs costs and price-gouging executives: You rail against both, but continue to take donations from Big Pharma (especially you, Mrs. Clinton).”

“Will you pledge tonight to give back those contributions? Will you put a concrete limit on annual price increases? What about executive salaries?”

Trump will have the advantage only a billionaire can have: Not having to explain how large donations from pharma will keep him from supporting drug price reforms and answering the first part of the question thusly: “Yes, sure. I don’t need their money.”

But as a businessman and capitalist (and Republican) he cannot support increased regulation of the industry unless he appeases the audience and reneges on his promises if and when elected president.

What should Clinton’s reply be?