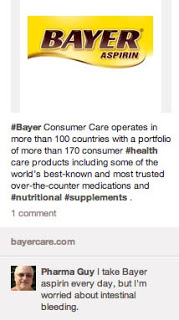 Two things occurred after I posted about Pinterest use by the pharmaceutical industry (here):

“Bayer has joined up-and-coming social network Pinterest and is using it to share images and information about its activities in the US” (Hat Tip to PMLive: “Bayer starts using Pinterest“).

Bayer snapped up the Pinterest username “bayerus” (“bayer” is being used by an individual named “Courtney Bayer”). It currently has three Pinterest boards: (1) Bayer’s Business, (2) Sustainability, and (3) Innovation. Twenty-eight items (including at least one video!) are posted to these boards.

Bayer has pinned a couple of product images, including this one for Bayer Aspirin (shown on the left; click on it for an enlarged view).

As you can see, visitors are able to add comments to these pins. Always the “spoiler,” I added a comment that was a truthful concern of mine, but one that points out a possible “adverse event.”

Aspirin, of course, is an over-the-counter drug not regulated by the FDA like Rx drugs are regulated. Therefore, Bayer does not have to worry about reporting this adverse event to the FDA. But will it allow the comment to stand and/or make a reply? I’ll let you know.

I have also “repinned” this image to my Pinterest “Pins from Pharmaceutical Companies” board (here). I notice that my comment does not carry over to the “repinned” image, so I added a comment about the comment I made over on the Bayer US Pinterest site.

I have found no way to edit or otherwise manage comments on Pinterest. It appears that the only option is to delete the pin and then repin it without the comments. This inability to moderate comments may be Pinterest’s Archilles heel as far as pharma is concerned. But as of this date, pharma’s presence on Pinterest is virtually unnoticed except for me and a few other pharma social media followers!

P.S. As I mentioned, Bayer included at least one video as a pin. I didn’t know you could do this. Kudos to Bayer for taking advantage of that capability!

UPDATE: Bayer responded to my comment today (4/9/2012) – about 4 days after I submitted my comment. Their response was:

“It is important that you speak with your doctor before you begin a daily aspirin regimen, only your doctor can determine if you are an appropriate candidate for aspirin therapy. Please contact us at 800-331-4536 (M-F 9:00AM -5:00PM Eastern Standard Time) we would like to learn more about your use of Bayer Aspirin.”

At least Bayer responded rather than deleting the pin as I suggested was an option (see above).

I think pharma needs to provide support to patients through every channel at its disposal, including social media. When Bayer, for example, suggested I call their phone number (M-F 9:00AM -5:00PM Eastern Standard Time) in response to the comment I made on their Pinterest site, I was surprised they didn’t just continue the conversation on Pinterest since that was the channel I used to open the conversation and thus clearly my preferred channel.

The alli lesson: Pharma marketing is not ready for transparency