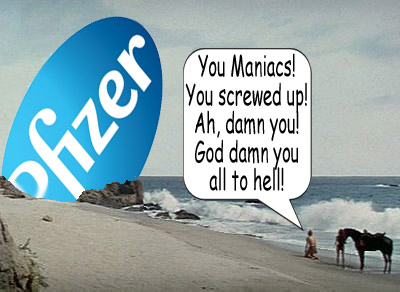 Grady Forrer over at the Pharmaceutical Research and Manufacturers Association (PhRMA) blog laments that the new version of Planet of the Apes — a movie I don’t think he has actually seen — does not jibe with reality (see Movie Dark Fantasy vs. Biopharmaceutical Reality).

“I do want to rail for a moment against the trite movie convention of the evil pharmaceutical company purposefully or negligently perusing research which results in harm to patients or, as in this case, humanity as a whole,” said Forrer, who urges viewers to resume their disbelief after seeing the movie. I assume he means disbelief that science and the pharmaceutical industry can do harm. I’m all for that, up to a point.

Anyway, I thought Forrer’s comments deserved a graphic that perhaps illustrates PhRMA’s fear of how surviving humans might view the pharmaceutical industry’s role in creating the NEW Pharma Planet of the Apes: