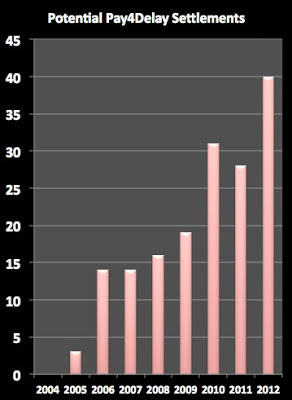 Here’s a plot of the data showing the trend over the past 9 years:

The study also found that in nearly half of these settlements, branded firms may have used the promise that they would not develop or market an authorized generic (AG) as a payment to stall generic drug firms from marketing a competing product.

Why the big jump in these deals? It’s another indicator that pharma has fallen off the patent expiration cliff and is using these deals to ensure “soft” landings. I thought, however, that such deals would have declined in the face of recent FTC challenges such as the complaint against Solvay Pharmaceuticals. According to the FTC, Solvay paid generic drug makers to delay generic competition to its branded testosterone-replacement drug AndroGel (see “FTC Sues Drug Companies for Unlawfully Conspiring to Delay the Sale of Generic AndroGel Until 2015″). Now that there’s Androgel 1.62%, a whole “new” formulation approved for marketing by the FDA, any previous pay-for-delay deal is beside the point.

Aside from developing new formulations, drug companies have other ways to avoid costly and public image busting pay-for-dealy deals. You might recall, for example, that Pfizer tried to extend the marketing life of Lipitor by implementing an innovative “Save the Lipitor Cash Cow” battle plan, which included:

The plan, however, failed (read more about it here and here). Perhaps Pfizer should have been less “innovative” and stayed with the tried-and-true “pay-for-dealy” deals.