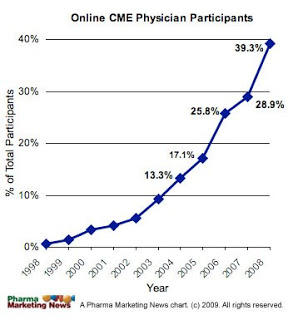 The 2009 annual report the Accreditation Council for Continuing Medical Education (ACCME’s) is out and there are a few interesting takeaways:

[Courtesy of Hooked on Ethics Blog]

Pharmaceutical industry (“commercial”) support of CME has been declining since 2004 when OIG began scrutinizing just where that money was coming from (ie, marketing budgets). The following chart shows the trend: 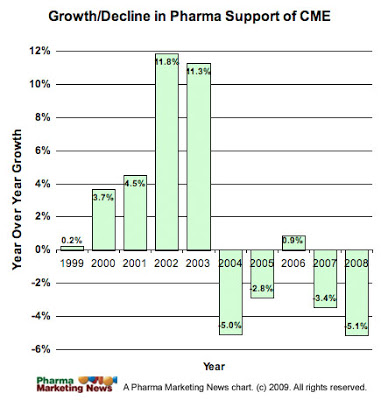 OK, there was a slight uptick in 2006. Other than that there has been a steady decline in pharma funding of CME year over year since 2004.

The pharma industry supports CME by funding different types of ACCME-accredited CME providers. These include for-profit Medical Education Communications Companies (MECCs), medical schools, and physician societies. The following chart shows how this funding has changed over the years: 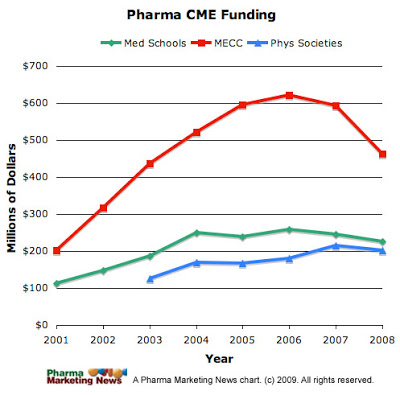 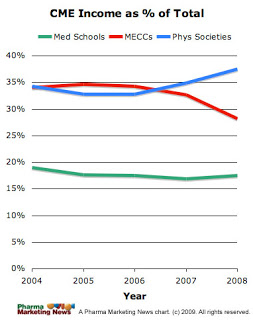 As pointed out by Danny Carlat in his blog, “commercial support for MECCs has entered free fall mode” (see here).

Such is NOT the case, however, for medical schools and physician societies. Although pharma funding of their CME activities has contracted somewhat, the decline has not been nearly as dramatic as the decline in pharma-funded MECC CME activities.

It’s not surprising, therefore, that physician societies have overtaken MECCs in terms of the percentage of total CME income made (see chart on left). 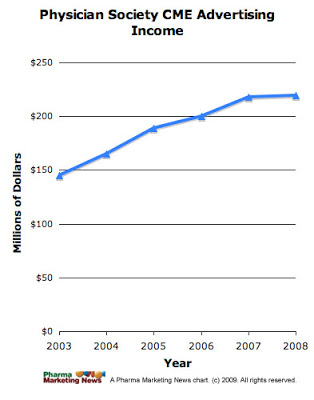 There obviously has not been any recession in this kind of advertising, at least not in 2008 when pharma spent $219.54 Million to advertise and exhibit at physician society CME events (compared to $217.91 Million in 2007). At the same time, pharma CME grants to physician societies declined from $215.39 Million in 2007 to $202.54 Million in 2008. In other words, more pharma-sponsored biased advertising and less pharma-sponsored unbiased education at these CME events!

Online CME Flourishes
More and more physicians are getting their CME online. The chart on the left shows the number of physicians who participated in online CME by reading printed pages (“enduring” CME content), not by participating in live CME events, which are still rare.

Does all this portend the end of MECCs? Danny Carlat thinks so:

“The 2009 [ACCME] report will look even worse for MECCs,” says Carlat. “Pfizer has announced that it will no longer fund them. The American Psychiatric Association is ending industry sponsored symposia, all of which are administered by MECCs. The AMA, in its latest CEJA report, said that commercial funding should be allowed only if the CME provider is deemed “not overly reliant on funding from industry sources.” Translation: for-profit MECCs will no longer be kosher. So goodbye MECCs. Your Christmas and Hannukah lasted a long time, but it’s finally winding down.” [Also see “Is CME in the US Doomed? Or Just For-Profit MECC’s?“]

What do you think? Please take the following survey and give me your opinion: What’s the Best Way for Pharma to Support CME?