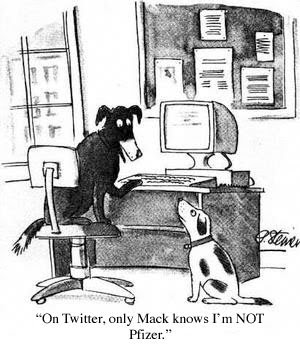 Ray Kerins (LinkedIn profile and @RayKerins?) — Head, Global Media Relations at Pfizer — and I were among the few people attending yesterday’s “Social Communications & Healthcare” conference who did NOT have a bad hair day in humid New York City. We both have no hair on our heads to speak of!

I made the mistake of Tweeting about that at the beginning of the conference. Later it came back to me. No good Tweet goes unpunished as they say.

First, Mario Nacinovich (@nacinovich), Editor-in-Chief of the Journal of Communication in Healthcare, Tweeted that Kerins and I were pretty popular people at the conference: “Kerins: Best in show. Geoghegan: ADHD Moms + Allies bchmk FB case. @pharmaguy: John Mack most referenced in SM next to FB + Twitter.”

It would have been bad enough if all this happened in the privacy of our own notebook computers and iPhones. This Twitter exchange, however, was available to all attendees to see on a separate huge screen on the stage! The conference organizers were using some diabolical Twitter app to project on that screen all the #BDI Tweets as soon as they were made! The technology, however, did not work fast enough so they had a good-looking young woman sit on stage to click “update” every so often. I think her presence added a certain je ne sais quo to the thing.

How did I achieve my 15 minutes of fame? It was all due to Ray Kerins, who mentioned me so often in his presentation (“Pfizer’s Social Media Strategy”), that Fabio Gratton (@skypen) Tweeted: “How to get followers on Twitter: Piss off John Mack ;)”

Yes, Kerins confirmed that because of me, Pfizer’s official Twitter account (@Pfizer_News), garnered a couple of hundred followers within minutes! And I had to pay $149 to some other diabolical Twitter app to get that! So, the way I figure it, Pfizer owes me a $149 dinner! (I am on a mission: to get a free dinner from each of the top ten pharma companies. See “Thank You Johnson & Johnson for Dinner“.)

In case you have not been following me (@pharmaguy) on Twitter (shame on you if you are not!), let me tell you the story of how I quadrupled Pfizer’s Twitter followers in a single blow!

Pharma Marketing Forums, which I moderate, has an “Industry News” forum in which is archived pharma news feeds from various publications. It’s a good way to keep up with news about the pharmaceutical industry from third-party sources.

Now that several pharmaceutical PR departments are using Twitter to Tweet about their companies (eg, @Boehringer; see “Pharma on Twitter: Boehringer Ingelheim“), I decided on Tuesday to start a new forum — “Direct from Pharma News” — dedicated to news feeds from these Twitter accounts. I included the @Pfizer_News news feed.

What followed was a very interesting exchange of Tweets about whether or not @Pfizer_News was authentic or not (see the entire Tweet stream, with time stamps, at the end of this post). At a couple of points during this exchange, Pfizer reps — including @RayKerins — Tweeted “we’re real!”

What’s the world coming to when the world’s largest pharmaceutical company has to issue Tweets claiming to be “real?” (Also see: “Pfizer’s PR Chief: “How in the hell do we have such a bad reputation?“)

It took some time for Kerins to respond to our inquiries — a full two hours, which is an eternity these days (a lesson learned by Kerins). While we were all having some fun at Pfizer’s expense on Twitter, Kerins was stuck in traffic court and couldn’t respond! He revealed this during his presentation yesterday.

In the end, I was convinced that @Pfizer_News was real and announced to the Twitterverse: “It’s official! @Pfizer_News & @RayKerins are the real deal on Twitter! I lose my bet.” That was enough to close the case and get @Pfizer_News hundreds of new followers. @lanes0220 said: “@pharmaguy and SM area helped prove @pfizer_news was real – true SM power”

ASIDE: A couple of other things about @Pfizer_News that telegraphed “phony” were noted by me and others:

(1) the Pfizer logo graphic used by @Pfizer_News was of such low quality, it was difficult to imagine the real Pfizer would approve it (@jonmrich offered Pfizer a high quality logo to use), and

(2) most of the Tweets from @Pfizer_News were simply the results of searches for “PFE” (Pfizer’s stock symbol) on Yahoo! and Google news. It looked like some Pfizer short (or long) seller was running the account rather than a corporate communications department.

Because of (2) I still do not include the @Pfizer_News feed in my “Direct from Pharma News” forum. I told my Twitter followers: “Kerins made a good impression on people here. He should have the same voice on @Pfizer_News Forget the PFE stuff!” I said the same thing to Ray at the conference.

Kerins was very gracious in his presentation and made a big hit at the conference. He captured our hearts when he showed a picture of his baby daughter and impressed me when he mentioned he was a volunteer firefighter. Ray Kerins is a real person! Or as my Jewish friends might say, he’s a mensch!

From @pharmaguy (me): @Boehringer & @Pfizer_News tweets now on Direct from Pharma News. More to come. http://bit.ly/1bndAf 7:56 AM Jul 21st from TweetDeck

From @jonmrich: @pharmaguy Have you confirmed with anyone from Pfizer that this is their official account? @pfizer_news. I haven’t yet. 8:10 AM Jul 21st from TweetDeck in reply to pharmaguy

From @pharmaguy: @jonmrich Good point re: @pfizer_news looks official & it’s on your wiki! What more proof is needed? 🙂 Have you called? 8:47 AM Jul 21st from TweetDeck in reply to jonmrich

From @pharmaguy: @pharmaguy It’s actually not on my wiki b/c I haven’t confirmed. I haven’t called, Usually someone contacts me, but not this time. 8:54 AM Jul 21st from TweetDeck in reply to pharmaguy

From @pharmaguy: @jonmrich Sorry. I thought I saw Pfizer on ur list. I sent Ray Kerins a note via LinkedIn. 8:57 AM Jul 21st from TweetDeck in reply to jonmrich

From @jonmrich: @pfizer_news Can you give me a contact number I can call to confirm? Not that I don’t trust you, but a reply could come from anyone. Thx! 1:36 PM Jul 21st from TweetDeck in reply to pfizer_news

From @jonmrich: What’d you think @pharmaguy? RT @pfizer_news: @jonmrich: Pfizer Twitter is real and official. Thanks for inquiring!1:42 PM Jul 21st from TweetDeck

From @pharmaguy: @jonmrich Well that certainly convinces me! What about you? @pfizer_news have Kerins respond to me via LinkedIn & confirm. 2:05 PM Jul 21st from TweetDeck in reply to jonmrich

From @Pfizer_News: @pharmaguy: John Mack – We are real! Ray Kerins will call you shortly. 2:58 PM Jul 21st from web

From @pharmaguy: @val1a My gut tells me I’m right. Just look at the pixelated logo! Amateurs. #1 pharma would never dis their image that way! 2:59 PM Jul 21st from TweetDeck

From @pharmaguy: @brianreid I bet two Tweets that they are fake, fake, fake. 3:06 PM Jul 21st from TweetDeck in reply to brianreid

From @pharmaguy: @shwen Nobody knows if you’re a Pfizer or a P[f]oser in the Twitterverse! 3:08 PM Jul 21st from TweetDeck in reply to shwen

From @pharmaguy: @RayKerins Is this the “real” Ray Kerins, VP of Communications at Pfizer? Or another P[f]oser? 3:30 PM Jul 21st from TweetDeck in reply to RayKerins

From @RayKerins: I guess we will find out when I see pharmaguy on Thursday 3:35 PM Jul 21st from web

From @pharmaguy: @RayKerins How about adding me to your LinkedIn network now? See your in box. 3:44 PM Jul 21st from TweetDeck in reply to RayKerins

From @pharmaguy: It’s official! @Pfizer_News & @RayKerins are the real deal on Twitter! I lose my bet. 4:01 PM Jul 21st from TweetDeck