Last year at this time I made “Some Interesting Pharma Predictions for 2013“. How well did I do? Well, although there is still one day left in 2013, let’s review a couple of last year’s predictions and then see what’s in my crystal ball for 2014.

What I predicted for 2013: “Direct-to-Consumer (DTC) Spending Will Continue to Decline”

I based this on the general economy, which I thought would still be in bad shape and thus continue to have a “negative impact on DTC advertising causing a slow death by a thousand cuts.”

Early data for the first half of 2013 as reported by Pharmalot, however, suggests that DTC spending rose by 1.2% in the first half of 2013. The total spend during that period was $1.82 billion. DTC spending on television rose nearly 3.8 percent, to $1.1 billion (61% of the total) during that period. Internet advertising — excluding search — rose 4 percent to $113.6 million (6% of the total). Magazine spending was flat, while DTC spending in newspapers, billboards and radio all plunged – 27 percent, 39 percent and 48 percent, respectively.

Assuming the 1.2% increase holds up for the entire year’s spending, the total would be $3.51 billion (see chart below; click on chart for an enlarged view). 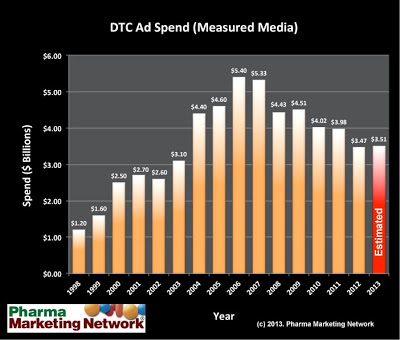 One caveat: We may be comparing Nielsen data “oranges” (orange bars) to Kantar Media “apples” (last red bar) because the two companies use different methodologies to estimate ad spending. Consequently, the jury is still out on my prediction for 2013 DTC ad spending — it’s too close to call.

What I predict for 2014…
DTC Ad Spending Will Increase

While there are many factors that affect DTC ad spending, I think 2 or 3 are important in the coming year. First, more new drugs have been approved by the FDA over the past 18 months. And there are marketing battles being waged in the “Low T” and diabetes markets. Plus, contrary to my previous beliefs about expensive biologics, new drugs in this category are being advertised on TV despite the dire deadly side effects. And it appears that the economy in general is picking up. In the past, DTC ad spending has tracked pretty closely with the general economy. It’s possible, therefore, for DTC spending in 2014 to equal that of 2011 or 2010 (i.e., reach the $4 billion mark).

What I predicted for 2013: “FDA Will NOT Issue Significant Social Media Guidance for Pharma in 2013”

As I said in my opening, there’s still one day left in 2013. Will FDA issue any social media guidance before the year runs out? Not likely if the FDASIA-TRACK site is any indication. Recall that FDA uses this site to “communicate its progress towards accomplishing the requirements of the FDA Safety and Innovation Act. If you search for the social media guidance, here’s what you will find today (click on the image to see an enlarged view):

There is nada in the “Actions Completed” column — no change since last year around this time. What has changed, however, is the “FDA Lead Organization,” which is now CDER and NOT the Office of the Commissioner as was the case last year. Why isn’t the Office of Prescription Drug Promotion (OPDP) in charge? Does that indicate a decrease in priority despite Tom Abrams saying that his peeps “are working very, very thoroughly and very hard – people are putting in extra hours” (see here)? Megan Clark Velez, MPH, Office of the Commissioner was listed as the contact person last year. Now, there is no contact person listed – just an anonymous email address. Ms. Velez may have quit FDA after I published her contact information here. She never did answer my letter of inquiry.

Congress requires FDA to “issue guidance that describes Food and Drug Administration policy regarding the promotion, using the Internet (including social media), of medical products that are regulated by such Administration” by July 14, 2014. I predict, however, that the FDA will either NOT meet that deadline (and maybe get an extension) or it will issue some minor guidance rather than “significant” guidance that answers all of pharma’s questions about FDA regulation of social media communications.

UPDATE: FDA Says It Has & Will Release Bits and Pieces of Long-Awaited Social Media Guidance Before July 2014 Deadline

Filling the Social Media Void: Shout or Be Shouted At!