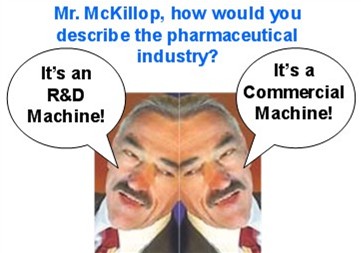 Tom McKillop, former CEO of AstraZeneca, seems a bit schizophrenic when it comes to describing his image of the pharma industry vs. the reality he has helped create.

Of course, I only have his words to go by as reported last week in the Wall Street Journal (see “A Veteran Offers His Take On the Drug Industry’s Future“; subscription required).

According to McKillop, “[The drug] industry is seen as a commercial machine not as an R&D machine.” He bases this on pub barside conversations. Indeed, Sir McKillop was spotted recently nursing a pint of bitter and conversing with barrister Ambrose Holingswood of Worwich Lane at The Slaughtered Lamb on Great Mutton Street in London.

Holingswood recounted that McKillop droned on and on about how the drug industry should “get back to talking about the R&D.” A few pints later, however, McKillop reportedly said “If you want to be in primary care, you need to be big enough to operate in sales and marketing.” Holingswood was confused (the three pints he drank did not help matters).

“Sir McKillop,” Holingswood ventured, “didn’t you create AstraZeneca out of two smaller companies precisely to build a commercial machine, not an R&D machine? I remind you that you once said ‘innovation rates have been poorer with very large companies.’ It seems to me that you cannot, therefore, have both effective R&D and commercial prowess as the two are mutually exclusive if one is to literally interpret what you have said.”

“Yes Holingswood, I did say that,” countered McKillop, “but AstraZeneca achieved the Goldilocks balance — it’s large enough for marketing clout but not so big that drug discovery and development can’t be managed effectively.”

“I see,” said Holingswood as he sidled further down the bar away from McKillop who began crying into his beer and mumbling the phrase “talk about the R&D, achieve Goldilocks balance” over and over again.

Pharma’s Jekyll vs. Hyde
It’s not Goldilocks and The Three Bears that comes to mind when I think of Big Pharma. Robert Louis Stevenson’s story of Dr. Jekyll and Mr. Hyde is more appropriate. R&D, of course, is the Dr. Jekyll (“good”) side of pharma and sales and marketing is the Mr. Hyde (“evil”) side. The two cannot long survive in the same body. One or the other must prevail. I see it just as Stevenson saw it — Mr. Hyde will prevail!

According to RLS, “Hyde was indifferent to Jekyll, or but remembered him as the mountain bandit remembers the cavern in which he conceals himself from pursuit.”

Pharma is being pursued by its critics and, like Hyde used Jekyll, is using R&D as a cavern in which to hide. It just can’t work. It’s time for the pharma industry to “bring the life of that unhappy Henry Jekyll to an end” by leaving the innovation to more agile and efficient smaller companies and focusing on commercialization.

Yes, the industry will have to face being despised and hated, but it could work on making its Hyde side more ethical to mitigate the negative baggage that comes with commercialization. And, by leaving the research to partners, it can break the influence that Hyde has over Jekyll at least to a greater degree than is possible now when both reside in the same body.

There already is a trend in this direction as big pharma licenses more drugs developed by biotech and other smaller companies. Unfortunately, Big Pharma companies want to have it all and eventually gobble up the smaller companies, thereby stifling innovation.

There may be gold in biotech, specialty, and orphan drugs that are indicated originally for very small populations of patients and later find much wider use. These non-blockbusters, however, require a completely different kind of marketing. A very good article on this topic is “The New Branding Model: From Blockbusters to Targeted Therapies” (free summary; small fee for complete text).

Whether or not the current the blockbuster model embraced by the pharmaceutical industry remains viable “is one of the most interesting questions at the moment,” says McKillop (for more on this, see “Movies and Drugs: Same Blockbuster Mentality“).

Meanwhile, back at The Slaughtered Lamb, McKillop suddenly regained his composure, sprang up and cornered Holingswood in the loo. “The blockbuster model must go, you know,” McKillop ominously uttered as Holingswood backed away. “Yes, Mr. Hyde — I mean Mr. Jekyll, Sir McKillop, whoever you are — yes, yes, it must go and so should I. Mind if I zip up?”

These Mobile Apps Are Subject to FDA’s “Enforcement Discretion.” Whaaa?