At the DTC in the New Era conference last week, I heard an interesting statement from Dale Taylor, President & CEO of AbelsonTaylor, Inc., an agency responsible for the Rozerem promotional campaign. He said that the professional Rozerem campaign promotes a “completely different message” than the DTC campaign and you won’t find any beavers or Lincoln images in the physician promo pieces — although the patient pamphlets DO feature Abe and the Beav.

Since hearing that, I am dying to actually see what Takeda is telling doctors. After all, “only your doctor can tell you how Rozerem is different” according to the DTC ads.

Then I spotted the post “Grabbing MDs attention at conference exhibitions” over at PharmaGossip and followed the link to Dr. Kevin Pho’s Medical Weblog where he published several amusing photos of pharmaceutical medical meeting exhibit tricks he uncovered at the recent Pri-Med East 2006 conference (see “How to get a doctor’s attention; or, how far will drug reps go?“).

Lo and Behold! Dr. Pho took a Rozerem exhibit photo, a retouched version of which I present here: 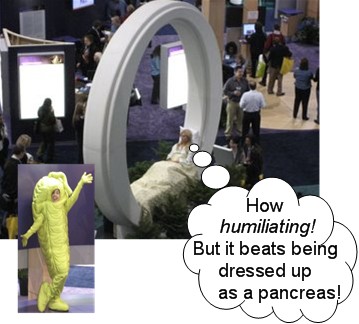 “Sleeping all day in your pajamas! (The “O” is for Rozerem – and yes, that was a real person sleeping there. Nice work if you can get it.)” — says Dr. Pho.

I don’t suppose hiring a model to sleep all day is as expensive as hiring one to imitate a pancreas. So at least Takeda saved some money there, although I got to wonder how they ship that “O” around!

The “O” in this physician promotional campaign is as mysterious as “Abe and the Beav” in the DTC campaign. What does it mean? I know there’s no “O” in Lunesta or Ambien. Can that be it?

I suspect that the overriding goal of this exhibit is the same as the goal for the DTC campaign, which was so eloquently stated by Mr. Taylor: “to be different” and to create “buzz” (see ” Rozerem Ads Innovatively Ineffectual“). I don’t see very many physicians, however, “buzzing” around the “O” exhibit here.

Dr. Pho couldn’t tell me what the Takeda reps in the Rozerem booth were telling docs about Rozerem: “I’ll be honest,” he said, “I had no interest in Rozerem and didn’t go into the booth.”

[BTW, I am not the only person who thinks “cutting through the clutter” should NOT be the overriding principle behind advertising. See ” ‘We wanted an ad that people talked about’ That is pure BS! over at the DTC Marketing Blog.]

If you look at the Pri-Med East 2006 exhibitor list and click on Takeda Pharmaceuticals ( here), you will get a tidbit of the message aimed at physicians:

“Come and learn more about Rozerem (ramerlteon), the first and only nonscheduled prescription insomnia product that targets the normal sleep-wake cycle, does not act by CNS depression and is approved for long-term use.”

Succinct! And it manages to get across 3 or 4 key differentiators. Yet the only one covered in the DTC ads is “approved for long-term care.”

FDA Regulation of Medical Exhibits and Conference Web Sites
BTW, how are little promos like this on medical conference sites sponsored by CME providers like M|C Communications — host of the Pri-Med Conference — regulated by the FDA? For example, the benefit statement above is not balanced by risk information, nor is there any link on this page to the package insert or to the Rozerem Web site where the physician can see the PI.

Perhaps M|C Communications will claim that they wrote the promo, not Takeda and the FDA has no jurisdiction over what it can say. Yeah, right!