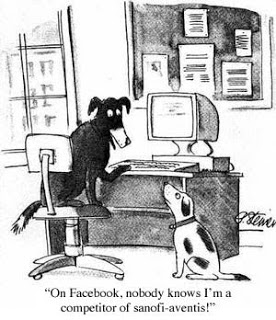 Simultaneous posts on Pharmalot and Pharma bnet have focused on what seems to be a disgruntled patient who posted photos and comments on sanofi-aventis’s (S-A) Facebook page (see “Bald Women Lash Out At Sanofi-Aventis & Taxotere” and “Sanofi’s Latest Challenge: Women Who Say Its Chemotherapy Left Them Permanently Bald“).

“Ann Adams” posted this message to S-A’s Facebook Wall: “Good morning Sanofi, i had your drug Taxotere and as you can see from me photo this is what my scalp looks like 4 years later. Do you have any comment to make?” Her bald head photo appears on S-A’s Facebook page as well. See the screen shot below:

I clicked on “Ann Adams” to learn more about her and found her Facebook page that had one message on the Wall: “This is my disfigurment from your drug Taxotere, the drug you kept this adverse side effect secret. Why dont you want to answer my letters and emails?” 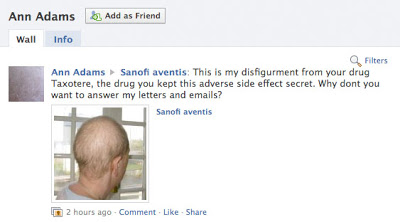 I assume this was a message she had also posted on S-A’a page, but I can’t find it there.

Ann says: “Its very unpleasant of you Sanofi to have an unhappy customer blocked from your page.”

The timelines don’t match up. The post on Ann’s FB page says it was made 2 hours ago (see screen shot above), but Ann’s S-A FB post about being blocked was made 8 hours ago.

Is “Ann” authentic or just a scam perpetrated by a disgruntled S-A employee or a competitor?

On the Internet nobody knows!

UPDATE: See comment to this post, which claims that “Ann Adams” is a real person. That comment cited an article in which “Ann Adams” was quoted.

Sanofi Loses SM Face Over Hair Loss PR Debacle
I also received a note from an anonymous friend who said:

“‘Ann Adams’ would appear to be a pseudonym for Shirley Ledlie (see Jim Edwards’ post from Saturday), given the identical scalp images. I would hypothesize, given the accusations of blocking, that Ledlie’s posts were removed and that she subsequently opened up a pseudonymous Facebook account as ‘Ann Adams’ to repost them…and scold s-a for blocking her in the first place.

“…this is the sort of PR event that any company (especially a company already aware of organized criticism) should have been prepared in advance to respond to…and it represents the degree to which pharma misunderstands social media (as most other industries did 3-5 years ago) in jumping straight into ‘push’ mode (e.g., FB ‘fan’ page) without first understanding in depth the conversation that’s already going on and the motivations, needs, and behavior patterns of those already engaged in the conversation.”

UPDATE TO UPDATE:
It looks like we may have been “pfooled” by a phony, pfishy sanofi aventis FB page!

The New York Times, DTC, and Me