Based on some minimalist data reported in the Wall Street Journal, Bob Ehrlich of DTC Perspectives Blog concludes that “we need to be judicious how we approach patients with side effect information” in direct-to-consumer (DTC) advertising of Rx drugs (see “Fair Balance or Scare Balance“). The WSJ article cited some not-very-scientific research, which “shows” that “expecting to feel ill can bring illness on in some instances” (see “Power of Suggestion: When Drug Labels Make You Sick“).

Clearly this WSJ article is another example of Ehrlich’s expressed perception that the media “[hypes] negative outcomes with their ‘death in your medicine cabinet’ type stories.” NOT!

In this case, the media is a great source of questionable research that Ehrlich can use to make a case against current FDA thinking that risk information is not adequately communicated to consumers in DTC ads. Here’s what Ehrlich says:

“She [ie, Melinda Beck, the WSJ reporter] cites several studies which show how powerful the power of suggestion is in making us think we have side effects. In a study last year men taking a drug for prostate enlargement who were informed it could affect sexual function were three times more likely to actually have erectile dysfunction than those not told. In another study, subjects were given sugar water and told it could make them vomit. Of those told of the potential side effect, 80% actually did vomit.

“The point of Ms. Beck’s column is that we need to be judicious how we approach patients with side effect information. I believe we need to do a better job giving patients the real odds of something happening to them.”

The WSJ does not tell us much about the details of the studies cited except that one study was a “double-blind” — impressive so far — study involving 60 people — NOT so impressive! The sugar water study was done in some unidentified hospital in the 60s (institutions did lots of weird studies on unsuspecting patients in the 60s!). Again, not impressive and hearsay as far as I am concerned.

The erectile dysfunction study involved 120 patients and was done at the University of Turin (see here) — probably next door to the scientists trying to prove that the Shroud of Turin is authentic!

In the Turin study, 60 men were not counselled on the drug’s sexual side effect and 60 men were told “…it may cause erectile dysfunction, decreased libido, problems of ejaculation but these are uncommon.” Only 107 men completed the study: 52 men in the first group reported problems compared to 55 in the second group.

This is the sort of small difference in a tiny sample that many experts would dismiss as not scientifically valid. In fact, that’s exactly what GSK claimed when results from their own study suggested that Avandia may increase cardio-vascular incidents (see “Avandia: Enough Blame to Go Around“).

What Ehrlich doesn’t mention at all in his “Fair Balance” piece is the other side of the balance sheet: benefit statements made in DTC ads.

I am sure there are studies that show patients’ symptoms IMPROVE when they are lead to believe that there will be improvement. In fact, many people given sugar pills in clinical trials DO improve precisely because of this “placebo effect.” The WSJ article, like Ehrlich, focused only on the “nocebo effect.”

The FDA may agree with me and they want to determine if there is actually a fair balance between risk statements and benefit statements.

“I propose FDA study the effect of risk communication in the context of the scare effects,” said Ehrlich. “They focus on adequate communication of risk and side effects but not on whether it is interpreted wrongly. It would be interesting to see consumers place the odds of occurrence after seeing ads. I bet they vastly overstate the odds of serious side effects happening to them.”

And I bet that they also vastly overstate the odds of benefits happening to them!

“I am afraid that telling consumers everything that could happen to them is not protecting them or informing them. It is a shotgun approach that makes regulators feel better but does not promote real consumer protection.”

In the Pharma Marketing News article “DTC Risk Communication: Is More or Less Needed?” I quote several experts on risk communication in DTC advertising, including my friend Harry Sweeney, Chair of the Executive Committee for the Coalition for Healthcare Communication. Harry was recently inducted into the Medical Advertising Hall of Fame.

“We ought to clarify that risk is a lot more than odds and probability,” said Sweeney. “You have to have a hazard. You have to be exposed to the hazard. Then there’s proportion — the magnitude of the risk, which is not discussed in the pharmaceutical world. We are given tiny numbers upon which to make important major communications policy decisions.”

Sweeney pointed out the need for a baseline of what consumers understand about drug risk before we can move the needle where it ought to be. He engaged the audience in a “parlor game” as a demonstration (see chart below). 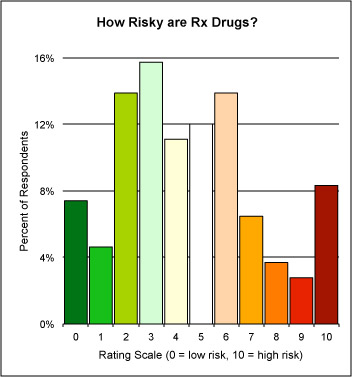 Who Should Pay for Merck’s Obstructionism?