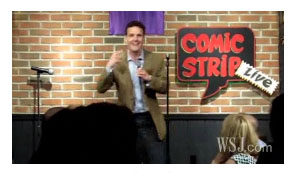 Back in October, 2010, I floated the concept of Pharmaguy’s Comedy Improv(e) Club, through which I hoped to highlight the humorous side of the pharmaceutical industry (see here).

Unfortunately, I didn’t pursue that half-baked idea and somebody beat me to it!

Here’s a bit of Shaw’s Shtick:

“I know what you think when you hear compliance officer,” said Mr. Shaw at the beginning of his act. “Dynamic, charismatic, well-dressed, gets into all the clubs, has to beat off women—and men—with a stick.”

Then he went into character, as an overwrought guy who sees risk everywhere, until he’s pushed near his breaking point.

“But heavy is the head that wears the crown!” he said, his voice rising: “Day in, day out, my job…is to find risk, to understand the problems associated with that risk, and to find solutions.”

Shaw won his title during a recent competition at New York’s Comic Strip comedy club. The competition was  organized by executives at Howard-Sloan, a headhunting firm in New York. The event raised over $11,000 for juvenile diabetes research.

Congratulations to Michael Shaw! You have redeemed the pharmaceutical industry by demonstrating the human side of the business!

Cutback in Prescriptions is a Sign of Pharma Recession