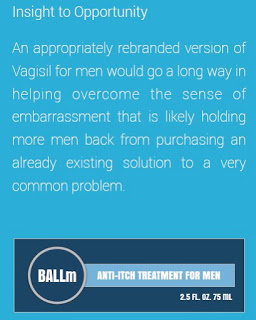 Infegy is a company that claims to have cloud-based technologies that can transform “huge volumes of [social media] commentary into valuable consumer insights.”

To prove how valuable these insights can be, the company is published a report that offers several “quick snapshots of various use cases that can be leveraged for the pharmaceutical and personal care industries.”

One case study involves Vagisil, which gives women relief from vaginal discomfort and itching due mainly to yeast infections.

While performing a brand reputation audit of Vagisil, an Infegy analyst found
that more men were talking about the
product online than women. According to the report, “the majority of these male commentators were referencing Vagisil
when doling out insults.”

OK. Obviously, that’s not very helpful if you are looking to social media for ideas about line extensions. However, the analysis also found “subsections” of social media conversations about a topic that Infegy believes uncovers an opportunity to rebrand Vagisil for men: Itchy balls!

“When
men discuss problems related their testicles itching,” says the report, “one of the most
frequently cited causes are yeast infections.
Because yeast infections are often seen as a problem that only affects
women, there is notable apprehension about the prospect of walking into a
store and buying a product labeled and marketed for the opposite sex.”

So, Infegy suggests a new brand for the active ingredient(s) of Vagisil: BALLm. I kid you not!

But the report also mentions another case of how social media can not just identify potential rebranding opportunities, but also help make ridiculous rebranding more palatable.

That case involves the rebranding of PROZAC, which is off-patent, as SARAFEM.

In August 2000, Eli Lilly introduced Sarafem, a drug marketed to women to treat premenstrual
dysphoric disorder (PMDD). However, there was nothing new
about the drug itself. Sarafem and Prozac are the exact same compound. The difference?
The name, color and packaging. “However,” notes the report, “just this change opened the
drug up to a whole new market.”

I doubt that just changing the name color, and packaging opened a new market. Infegy does not explain what the role of insights from social media had in the rebranding of generic prozac (fluoxetine) as Sarafem, but I suspect there were no social media conversations about “premenstrual dysphoric disorder,” which many health professionals say does not exist.

Here’s how social media played a role in opening a new market for prozac (rebranded as Sarafem), which I first reported back in 2006 (read “CGC: Old Wine in New Bottles“).

Richard Myer over at The World of DTC Marketing told me:

“When I launched Sarafem online, a re-branding of Prozac for severe PMS, we allowed women to send us their stories, and post them, regarding their experiences with PMS and PMDD. I was surprised when the first week of going live we had over 200 stories.”

Rich was being a little coy — I am sure he was a bit more proactive about this and did more to obtain stories than just “allow” them to flow in. Nobody — not even me — is going to waste any time sending stories to pharma companies without some kind of tit-for-tat. Usually, it’s a contest — someone with the most compelling story may win a trip for two to Hawaii or get their 15 minutes of fame by having their faces and story plastered all over product brochures. They might even get some newspaper or TV coverage!

In any case, the stories were posted to a social media site that featured “consumer-generated content’ (CGC). In this case, UGC posted through a third party (a pharma company).