Peter Pitts, former spinmeister — er… I mean Associate Commissioner for External Relations — for the FDA and currently spinning for the pharmaceutical industry at Manning, Selvage & Lee, is also a “pundit” at DrugWonks, which cranks out tons of pro-pharma BS under the guise of “debate.”

A recent post by Pitts entitled “General GAO’s Chicken” is a good example of the Pitts style. Aside from dissing my favorite Chinese takeout dish, this post is critical of the just released Government Accountability Office (GAO) report that found that “the FDA does not have clear policies for addressing drug safety issues and that it sometimes excludes its best safety experts from important meetings.” [see the report “Drug Safety: Improvement Needed in FDA’s Postmarket Decision-making and Oversight Process“; read the Washington Post story: “FDA Is Criticized Over Drugs’ Safety Problems“.]

Pitts simply dismisses the entire report by suggesting it’s old news and that the real issue is money (“Senator [Grassley, whose Senate committee ordered the GAO report after the Vioxx debacle], for the umteenth time Â SHOW FDA THE MONEY!”).

Actually money is not the real issue, as anyone who takes the time to read the recommendations of the GAO report would quickly see. [Pitts, of course, does not bother to provide any links to primary or even secondary sources so readers can check his facts or make up their own minds. Typical of a spinmeister who needs to control access to information, not share it. Some blogger!]

The GAO recommendations are as follows (and I quote, see page 2 of the report):

None of these recommendations seems to require a bigger FDA budget, although I concede that recommendation #1 may require pharmaceutical companies to spend more dough, which is probably Peter’s real gripe.

Speaking of postmarketing studies by the drug industry, it is a well-known fact that the industry is renegging on its pledge to do the necessary research on drug safety. The FDA recently reported on the status of postmarketing study commitments made by the industry (see the March 3, 2006 Federal Register entry). The data are plotted in the following chart (which I find much more enlightening than looking at numbers in a table): 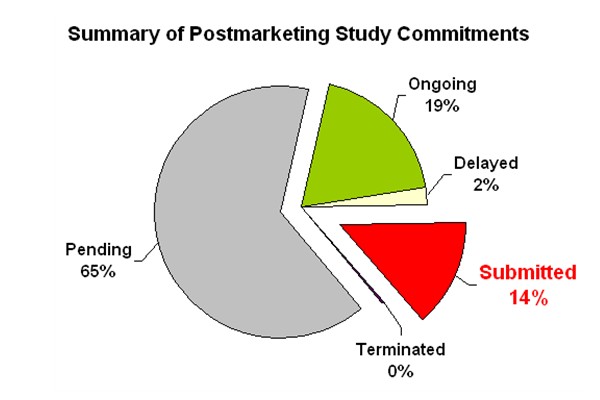 Clearly, if 65% of these studies haven’t even started and only 14% have been completed and submitted, the FDA does need more authority to enforce these commitments by the industry.