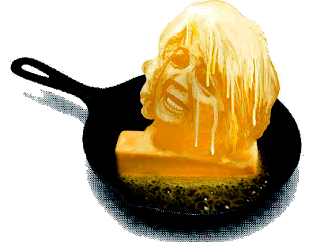 Just when you thought the latest Paula Deen news cycle is over, up pops a new article about the celebrity chef’s fall from grace.

For example, I found this image of a Paula Deen butter sculpture melting in a skillet in the July 2, 2013 issue of Bloomberg Businessweek (see “For Paula Deen, Management Mess Leads to Career Meltdown“).

I had to enhance it a bit so you can better see Deen’s face and the crocodile tears of melting butter.

Actually, Novo claims they suspended “all activity with Paula Deen” — they did not suspend (i.e., dump) HER per se. In a call with a Novo representative, I was told that Novo would not provide any details about the Deen contract including whether or not Deen was still being paid or whether they took care to include a “morals” clause in the contract. If not, Novo does not have clear grounds to hold Deen in breach of the contract and they cannot dump her, but only “suspend” activities with her.

BTW, I wonder if Novo is still paying Deen while she’s on the DL list?

Many PR pundits have predicted that Deen will eventually be forgiven for uttering racial slurs and that Novo will “re-instate” her as a spokesperson. However, according to the Bloomberg Businessweek article, “there’s little chance she’ll recover the stature that made her one of America’s most improbable entertainment moguls. ‘Before you couldn’t rebound from a sex scandal; now you can. But scandals involving animals, children, and race are career killers,’ says David Johnson, chief executive officer of Atlanta-area public-relations firm Strategic Vision.'”

Boston Legal’s Denny Crane Takes on Pharma Marketing. Where does he...