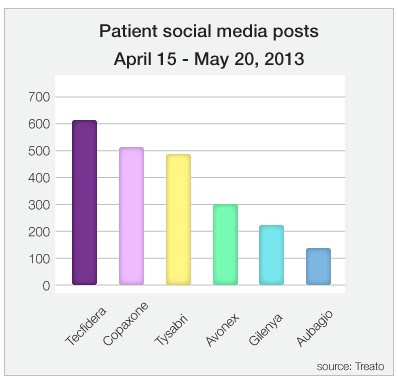 According to Gideon Mantel, co-founder and CEO of Treato, social media can predict the success of a new drug launch much faster than traditional methods.

“Many pharmaceutical companies try to measure the success of their launch based on weekly script trends,” said Mantel in a blog post (here). “The difference between social media data and data derived from prescriptions is significant: social media data can predict the future, while script data record the past.”

To illustrate this, Treato looked at patient-written social media posts on over 2,000 health blogs and forums to find mentions of Tecfidera (formerly called BG-12 during clinical trials), a new multiple sclerosis drug that Biogen launched on April 13. Since the launch of Tecfidera in mid-April, the most talked about MS drug in social media has been Tecfidera, bypassing all other MS medications and growing on a daily basis (see chart below):

The following is an edited conversation I had with Mantel:

“Our early prediction is that – assuming no significant side effects during the launch cycle – Tecfidera will gain significant market share, primarily taking it away from Tysabri, Copaxone, and Aubagio,” said Mantel.

I await the results of real-world, traditional script data to see if Mantel’s social-media-based predictions hold up. Although many patients may say they wish to switch to Tecfidera, as Gideon says, they may not do so if there are negative side effects — including price! “The growing price sensitivity among patients will be an important factor,” says Mantel, “and the current price may not be optimal (14% of the posts talk about price/insurance).”

Social Media Failed to Do the Job, So Biogen Turned to DTC to Promote Tecfidera

Determining How Much Pharma Spends on Internet vs. TV DTC Advertising...