Roy Vagelos, Former Chairman and CEO of Merck, gave a keynote presentation at the Pharmaceutical Marketing Congress in Philadelphia this past Tuesday. His presentation was entitled “Medicine, Science, and Merck: The Changing Pharmaceutical Industry.”

Vagelos began his career as a physician and medical researcher. At Merck, he was also head of research before being “promoted” to CEO.

Dr. Vagelos made many interesting points that I’d like to summarize in this Blog and in a future issue of Pharma Marketing News. Topics Vagelos addressed were science, credibility, pricing, and the future of the pharmaceutical industry.

Science
Vagelos told a story of how Merck science and leadership was responsible for some of the greatest drugs ever developed. As Dr. Vagelos went through his presentation, I felt that I was in the presence of a dying or already dead breed of pharmaceutical executive — an executive with a passion for and a deep understanding of science.

In all the hubbub back in March when Merck was looking for a new CEO, no one expressed much interest in the job. I even turned them down (see John Mack Rebuffs MerckÂs CEO Offer). The candidates that Merck considered for the job came form the “suit side” of the business, not from the science side as Vagelos did.

The current CEO of Merck, Richard T. Clark, is an operations guy, who promises to bring efficiency, not scientific glory back to Merck. As described in the Wall Street Journal at the time, Clark is “an insider without a background in medicine at a time when observers agree that the company desperately needs to focus on developing new drugs. Moreover, Merck made its selection even after its glory faded under a previous nondoctor, Ray Gilmartin.”

No wonder that Merck cannot even explain its own science (see Merck science “like wah, wah, wah”).

So, it was very refreshing and uplifting to hear the personal story of an “old-time” pharma leader who came up from the ranks on the research side of the business. After hearing about Vagelos’ personal experience at Merck and his opinions about the future of the industry (he said, for example, that research inside big pharma companies will “atrophy to some degree”), it may be time for PhRMA, the industry trade group, to drop “Research” from its name!

Credibility
According to Vagelos, the pharmaceutical industry is undergoing a revolution. He cited, first, the drop in the public image of the industry as noted in a 2004 Harris poll. In that poll, conducted in April 2004, respondents were asked “Do you think [the following industries] generally do a good or bad job serving their consumers?” Pharmaceutical and drug companies ranked near the bottom along with oil companies and tobacco companies. Less than half (44%) of respondents answered “Yes” to the question as applied to the drug industry. In the 2005 Harris poll, that number increased to 56%, but the trend is still downward (see CHART). 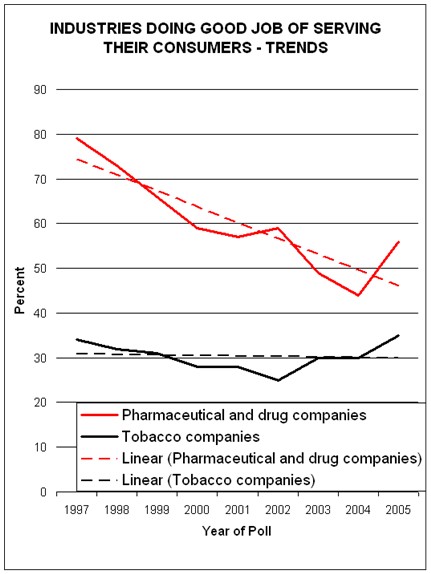 If the trend continues, within 3 years pharma companies will have as little respect from consumers as do tobacco companies! Quite ironic considering that one industry’s mission is to improve lives and the other is to addict people to life-threatening products! Can you guess which is which?

Pricing
According to Harris, concerns about prices are clearly the reasons for the decline in the ratings of oil companies and pharmaceutical companies.

Vagelos described Merck’s pricing strategy, which is (was?) based on “value”: the value that drugs have in keeping people alive, out of hospitals, keeping them at work, and quality of life improvement. Competition, of course, is another factor to consider when pricing a product.

Most drugs on the market, said Vagelos, have tremendous value and are priced right. “We have outliers, however, that are going to kill us,” warned Vagelos. He mentioned cancer drugs that are sold for $50,000 that deliver only 4 months of added lifespan on average. “I think that is very damaging,” Vagelos said, “and does not follow the value line.”

Back in 1990, when Vagelos was CEO of Merck, he suggested to only increase prices at the rate of the Consumer Price Index (CPI). There was a “fair amount of grumbling,” but Merck did it and was successful because it was a market leader and other companies followed. “Unfortunately,” said Vagelos, “that has changed. Drug prices are increasing twice as fast as the CPI and that is going to be very damaging ultimately.” You only have to look at data cited by the AARP, which tracks drug prices versus CPI, to see that this is true:

New data analyzed by the AARP Public Policy Institute show that over the 12-month period ending March 2005, manufacturers raised the price they charge for 195 brand-name drugs most commonly used by older Americans, on average, by more than 6 percenpercentpercent). By contrast, over the same period, manufacturers raised the list price of 75 most commonly used generic drugs, on average, by less than 1 (0.7) percent. The general inflation rate, as measured by the Consumer Price Index (CPI), averaged 3 percent during the same period. (See “Average Price Increase of Brand-Name Drugs More Than Doubles CPI“).

What Do You Get Out of Doing Good?
Vagelos recounted Merck’s contribution to world health through programs that offered drugs free in developing nations. Vagelos and Merck thought this was good to do for a company dedicated to health.

It also was very good for the morale of Merck employees. “The people at Merck,” Vagelos said, “were very excited that Merck would do such a thing. At that time and for more than a decade afterward, Merck was able to recruit anybody to any part of the company they wanted. It made it such an attractive company!”

It’s difficult to imagine Merck employees feeling excited about their company today, especially with years and years of Vioxx-related litigation to look forward to (“We are in this for the long haul,” Merck general counsel Kenneth Frazier said. See “Merck vows to fight Vioxx suits“).

I mentioned this to Dr. Vagelos as he signed a copy of his book, “Medicine, Science, and Merck.” He nodded his head and looked sad as he wrote the inscription: “Good luck – keep up the good work.”