As reported on CNNMoney.com, Merck won the most recent case in a Los Angeles state court on August 2, 2006, when a jury found that Vioxx did not cause the 2001 heart attack of plaintiff Stewart Grossberg, 71, a retired construction manager from Northridge, Calif. (See “Merck vows to keep fighting the Vioxx war.”)

“Our scientific message got across to the jury and that confirms our litigation strategy of continuing to look at each of these cases individually, and we will be prepared to go to trial wherever these cases come up and whenever they come up,” said Kent Jarrell, spokesman for Merck’s outside counsel.

Les Funtleyder, analyst for Miller Tabak (an institutional trading firm), speaking of Merck’s strategy, concluded “a year into this, it’s proved to be prudent.”

Whoa, Nellie! If drugs were proved effective on the basis of such scant evidence, we’d really be in trouble!

Funtleyder conceded it’s too early to speculate whether Merck’s strategy will pay off, because there are more than 14,000 cases to go. “But so far, so good,” he said. 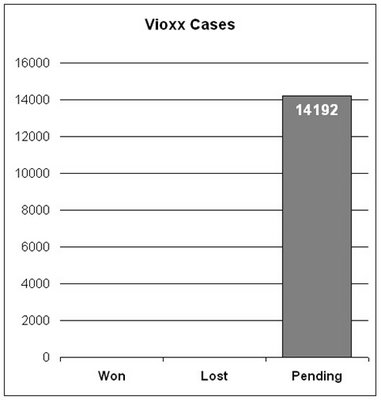 I didn’t forget to plot the wins and loses. The numbers are just too insignificant compared to the total number of cases. Only when you plot the data on a logarithmic scale can you see all the bars and even then the wins and loses are dwarfed by the pending cases: 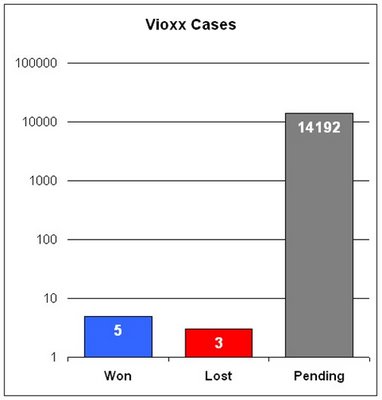 What About Time and Money?
Rather than measuring wins vs. loses, there are other measures of Merck’s strategy, namely:

Speaking to the first issue, Bryan Liang, professor of health law studies at California Western School of Law was quoted as saying: “I think they’re doing the right thing, at least from a cost-benefit point of view. Eventually they’re going to wear people down. If they continue to get more wins, I think that some plaintiffs are going to say ‘this is too much’ and they’re going to start dropping these cases.”

What the lawyers are really afraid of is the ADDITIONAL cases that might be filed if Merck were to cave in and settle. “[Fighting cases one on one] is a lot less expensive than to settle,” said LeCroy. “Because when you start doing mass settlement, you start getting settlements of cases that might not have any merit, and you start getting cases filed that have no basis or are very weak claims. If they were going to announce a mass settlement, I wouldn’t be surprised if you saw a fivefold increase in cases filed.”

Hmmm… the domino theory all over again.

More troublesome than the cost, are the personnel and time resources Merck needs to allocate to this war. Analysts also predict that the Vioxx War will be a long one. Some have estimated Merck will need to endure “at least 10 years of this.”

I fail to see the evidence for that rosy outlook. Simple math indicates the light at the end of the tunnel may be much farther away:

If it takes 1 year to decide the first 8 cases (the first Vioxx trial, which Merck lost, ended August 19, 2005, nearly one year ago), in what year will the last case be decided if there are a total of 14,200 cases, assuming a constant rate of settled cases per year? Corollary: If each case involves 4 employees (2 lawyers, 2 witnesses) providing 1 week of their time each, how many man-years will Merck need to invest to decide all 14,200 cases? Note: 1 man-year equals one employee working full time for 1 year, eight hours per day.

Tell me your answer to the first question by taking the following poll:

The answer to the man-year corollary is 1183 man years, which sounds about the same number of man years Microsoft spent developing the Windows operating system. But at least Microsoft made a lot of money as a direct results of all those invested man years!

Who Owns Your Social Media?