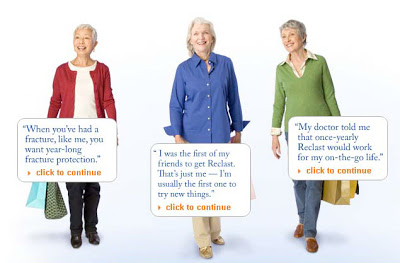 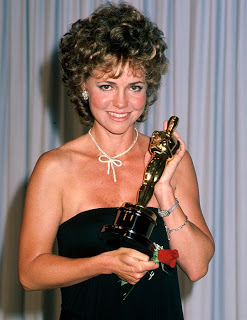 As written in wikipedia, “Break a leg” is a well-known saying in theatre which means “good luck.” It is typically said to actors and musicians before they go out onto stage to perform.

I doubt, however, that anyone would say this to Sally Field before filming one of her BONIVA TV commercials. BONIVA, after all, is a drug designed to PREVENT bone fractures in women with postmenopausal osteoporosis.

Actually, the patient information page (on Genentech’s site) linked to from the BONIVA Web site says “Boniva helps reverse bone loss in most women who take it, even though they won’t be able to see or feel a difference. Boniva may help lower the chances of breaking bones (fractures).”

The part about preventing broken bones, however, is merely conjecture propagated by the marketers of BONIVA. They know that women with osteoporosis are prone to bone fractures and that’s what gets them to take the drug.

But does BONIVA and other similar drugs such as Merck’s FOSAMAX, Procter & Gamble’s ACTONEL, and Novartis’ RECLAST actually INCREASE a woman’s chance of breaking a bone?

Where do I get a crazy idea like that? Well, from patients via social media! You know, the crowd that has all that wisdom. In a blog post entitled “Pharma and New York Times are ‘Puzzled’ by Bone Drug Fractures — But Patients Aren’t,” the author cites patient testimonials seen on askapatient.com, a social network site where people can rate the medicines they are taking.

Patients also posted stories about how they broke bones while taking BONIVA and similar drugs:

“After six years of taking Fosamax, I slipped in ice in my driveway and broke my femur (thigh bone). Two years later, still taking Fosamax, I fell in the snow and my other femur snapped before I hit the ground.”

“I am filling this out because my Mom took Boniva for many years. I now realize her death was in part due to her taking Boniva. She had so many of the side affects listed and I wish I had known while she was alive that they were caused by Boniva, so I could have taken her off of this poison.I suggested that she go on this-I feel so guilty. I hope this report helps others recognize what this drug does to your body. It certainly did not make my mother’s bones stronger. She had so much muscle pain all over, but especially her back, broke her pelvis and had fratures in 4 vertebrae while taking Boniva.”

The site is a virtual treasure trove of adverse events reported by patients! You can find the BONIVA stories here. Oh, the humanity!

I noted before that relying on the “wisdom of the crowd” to decide which drugs to take was a mistake (see “Crowdsourcing Vs. Science“). So, I don’t believe in patient ratings of drugs when you don’t even know the N — the number of people voting, which was the case with the iGuard ratings I criticized.

But 1084 is a pretty impressive N! Also, I might look to the crowd’s negative experiences to help inform me of the risks of drugs I am taking or about to take.

Like all Rx drugs, BONIVA has risks. One of them is increase bone brittleness, according to this report cited in the blog post I mentioned above:

“Bisphosphonates preserve and remineralize bone by turning off bone remodeling– creation of new bone–that would normally occur. But as early as 2004, Gordon Strewler, MD in the New England Journal of Medicine and Susan M. Ott, MD in the Annals of Internal Medicine warned the remineralized bones could become brittle and fracture-prone and that the drug may actually cause what it is supposed to prevent.”

In a study sponsored by Merck and Novartis, in which 14,000 women were given Fosamax, Reclast or dummy treatments for three to 10 years, these drugs do not “significantly raise the risk of a rare type of fracture near the hip” (see “Study Adds Evidence That Bone Drugs Work, Are Safe“).

That conclusion was based on 12 such “rare types of fractures near the hip.” Meanwhile, there a total of 284 hip and leg fractures in the study group.

This is reassuring, although the study cannot rule out risk, said Dr. Dennis Black, the study’s leader, who consults for makers of osteoporosis treatments. There was a trend toward more of these unusual fractures among bisphosphonate users, but the difference was small enough to have occurred by chance. “There are too few fractures for definitive proof. But what it does show is that these are very, very rare,” Black said.

The study was designed to counteract case reports that have tied these drugs to the unusual fractures of the upper thigh bone, just below the hip, that seem to occur without provocation or injury. But I don’t think the results warrant the glowing NYT headline “Study Adds Evidence That Bone Drugs Work, Are Safe.”

Another problem with the study was it was a “meta-analysis” of several different studies. I think GSK has balked at using such analyses when Dr. Steven Nissen cited the heart risks associated with AVANDIA. Just another example of the drug industry having its cake and eating it too!

Anyway, back to Sally. She’s been a spokesperson for BONIVA since 2006. So far, she hasn’t broken a leg that I know of and I hope she doesn’t break any bones in the future. It would be a devastating event both for her and for BONIVA, which is my focus here.

The problem with celebrity endorsements is that the celebrity may experience a side effect and become disgruntled and turn on the brand (see “Andy Behrman, Now an Anti-BMS Spokesperson, Says ‘Ask Your Doctor If Abilify is Wrong for You’“).

Sally has been taking BONIVA now for 4 years. Perhaps it is time for GSK to drop her before she becomes a liability. But, I wish her good luck. Break a leg, Sally!

That’s “Rhoda” on the left. “Age 65 • Senior citizens program director • Widowed • Plays a mean game of bridge, bakes the best brownies, knits one, purls one (scarf is a work in progress)” is how the site describes her on the Meet Rhoda page.

Is she a real patient?

Does Social Media Have an Impact on Public Health? FDA Wants...