What was hot in 2006 for readers of Pharma Marketing Blog? To determine this, I looked at the posts that received the most page views or that generated the most comments from readers and came up with the following review of 2006 highlights.

Failure, Fops, and Pfizer
By far, readers seemed most interested in catastrophic failures of the high and mighty, whether it be the fall of high-profile CEOs (eg, “Another Pharma CEO Bites the Dust!“) or highly-anticipated blockbusters (eg, “Pfizer’s torcetrapib: Who Knew What, When?” and “torcetrapib: “$800 Million” Failure but Kindler Safe“).

Speaking of the high and mighty, readers were VERY interested in “Marketing Executive Salaries.”

Pfizer, being the highest of the high and the mightiest of the mighty, is always a good subject for blogging and polling. When I wrote about torcetrapib’s failure, it generated quite a bit of discussion on the online Pharma Marketing Discussion Board, where at least one person characterized Pfizer as being arrogant. I wondered how many other people shared this view, so I ran a poll (see “Is Pfizer Arrogant and Superior?“) and came up with this:

I suppose Pfizer can live with that.

The post about Dr. Robert Jarvik, inventor of the Jarvik artificial heart and Lipitor “celebrity” spokesperson (“Lipitor’s Jarvik: Fop or Flop?“), was inspired by the purple tie he wore in some commercials. I learned that his claim as the inventor of the artificial heart is contested and some readers felt I was being too glib and even “snarky.” To see if other readers agreed, I did a poll (see “Snark Meter“) and asked readers their opinion. The results are shown below:

I can live with that!

Disease Mongering
“Disease Mongering” was a topic that frequently came up in 2006. The first time was the post “Disease Awareness or Disease Mongering?“, which appeared in April. The post “Pharma Tail Wags Patient Dogs“, which was the third most viewed page in June, discussed pharmaceutical company support of patient advocacy organizations that failed to disclose this support. The dog wags the tail, however, when these organizations are created de novo by pharmaceutical marketers, which certainly has to be the case with the Restless Leg Syndrome Foundation (for more on that, see “Restless Pharma Marketing“). It’s all part and parcel of what critics call “disease mongering.” You can hear a Pharma Marketing Talk podcast on this subject here. Dis Lincoln, Show Beaver
Insomnia posts were only second to erectile dysfunction posts in the number of page views received. Certainly, this topic received the most comments from readers. Back in September, 2005, I predicted that insomnia would be a hot pharma marketing topic (see “Insomnia – the Next DTC Frontier“) and I wasn’t disappointed. The high point (or low point, depending on your point of view) came in July, 2006, when I posted a critique of the Rozerem ad campaign (see “Rozerem Ads Dis Lincoln, Show Beaver“), which has generated at least 52 comments — the most for any subject. This post is now a classic and still top-rated in a Google search for “rozerem ad” or “rozerem commercial.”

Consumer Mis-Interaction
2006 was the year when pharmaceutical marketers were blitzed by agencies selling them on the merits of Web 2.0, social networking and engaging the consumer/patient. I’ve written quite a number of posts on topics related to this. In “Question Everything,” I question the authenticity of the participants of an online bulletin board sponsored by a pharmaceutical company. This issue — authentic response by consumers vs. “sock-puppet” marketing (or marketers disguised as consumers) — comes up often in the comments made to this blog. For example, a comment to a Rozerem ad critique was supposedly written by a “typical woman” who viewed an Abe Lincloln/Beaver Rozerem TV ad and decided right then and there to switch to Rozerem from Ambien. Yeah, and I have a bridge in Brooklyn to sell you! Of course, no one was fooled as the results of a poll showed: 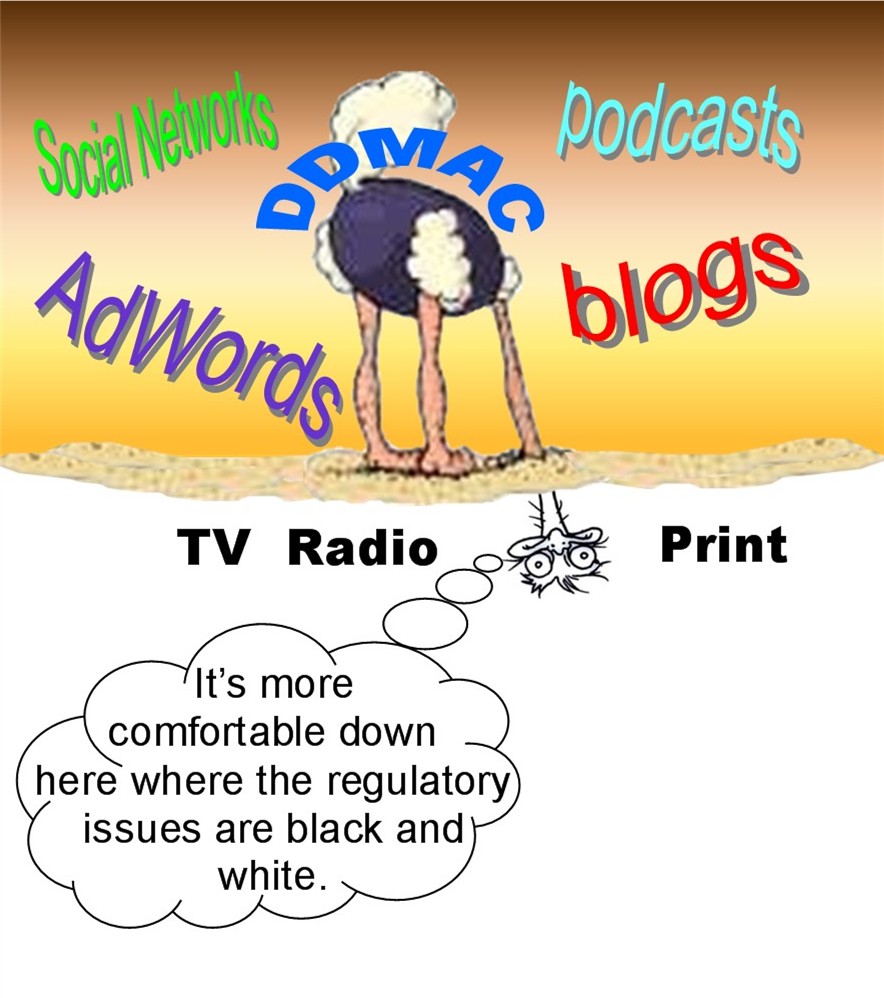 Web 2.0 and the advent of social network marketing is the new wild, wild west of Internet advertising. Isn’t it time for the FDA to get its head out of whatever hole it is in and issue some guidance on acceptable pharmaceutical Internet marketing practices? Better yet, the industry should take some steps to define its own guidelines to stave off overly-restrictive FDA guidance based on insufficient knowledge of the technology (for more on this, see “Where’s DDMAC’s Head At?“).

BTW, I had some first-hand dealing with pharmaceutical consumer relations that received a few comments from readers who were not all surprised (see “The Call Center from Hell“).

The Adventures of PhRMA Intern
The antics of the Pharmaceutical Research and Manufacturers Association (PhRMA) often came under scrutiny on this blog. This year, the Adventures of PhRMA Intern debuted and delighted many readers. PhRMA Intern has been characterized as a “Strange visitor from an Ivy League school who came to PhRMA with powers and ability far beyond those of Ken Johnson. PhRMA Intern! Who can change the course of mighty news stories, bend the truth at will, and who disguised as Emily Jameson (no relation to Jenna Jameson), mild-mannered intern for a great pharmaceutical trade association, fights a never ending battle for believability, justice for pharmaceutical companies, and the PhRMA way!”

PhRMA Intern’s first assignment was to respond to complaints PhRMA received regarding violations of its voluntary guidelines on DTC advertising (see “Adventures of PhRMA Intern!“). From there, she moved on to tackling terrorists on the issue of drug reimportation (“PhRMA Intern Tackles Terrorists“) and then to PR agencies (“PhRMA Intern vs. the Pharma PR Agency“) on the issue of whether or not “PR marketing” should follow PhRMA’s DTC guidelines. She met her match, however, fighting Allergan — the “we don’t need no stinking guidelines” company (see “PhRMA Intern vs. BOTOX!“).

I have no doubt that PhRMA Intern may be reincarnated in a new internship — perhaps at a pharmaceutical company or even at the FDA. Stay tuned! Breaking the Rules
Speaking of not needing stinking guidelines, there was plenty of opportunity this year to criticize companies that violated their own pledges to abide by PhRMA’s DTC Guidelines (see, for example, “Sepracor Sneaks In Lunesta Reminder Ad“) or even run Internet ads that violate FDA regulations. For an example of the latter, see “Lunesta, Google, and bAdWords“, which broached the topic of violative Google Adwords, which mention the brand name and indication but do not include side effect information or brief summary or any direct link to this information. It turns out that Google may be encouraging pharmaceutical marketers to use these types of ads. I pointed this out in a provocative — some might even say “snarky” — post entitled “The Girl from Google.” I received a lot of flack in comments to that post, but at least 79% of readers agreed with me that these ads violate FDA regulations (see chart below):

These results are pretty one-sided! It prompted me to submit an official complaint to the FDA. I haven’t heard back from that agency yet. Perhaps they are waiting for a summer intern to respond. While we’re waiting, enjoy the following video:

Requiem for Pharmaceutical Sales Reps
“Industry PR & Rep Morale” reviewed a survey that showed that the vast majority (85%) of pharmaceutical sales reps believed that public opinion of the industry has decreased. At the time, I thought that getting reps involved in improving public opinion by engaging in public appearances and whatnot was a good move by the industry. I didn’t think it would improve the public image of the industry (see “Sales Reps Make Poor Spokespeople“), but I thought the activity would boost rep morale and improve sales force efficiency. The industry, however, has a better, quicker way to improve efficiency — less reps!

I could go on, but I think this is a pretty good sampling of what was of interest to readers of this blog in 2006. I have every reason to believe that 2007 will be as interesting with lots of issues to discuss.

Happy New Year!
I wish everyone a happy, prosperous, and productive New Year. Let’s just try to keep the bullshit to a minimum, OK?

Write a Review in Exchange for a Free Pass to an...