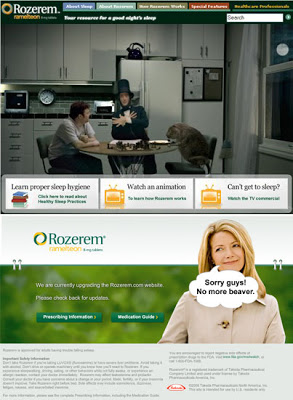 I have often commented on the critters used in direct-to-consumer (DTC) ads and have had a lot of fun at their expense. It seems that now I will have fewer of these critters to kick around.

As reported in AdWeek, Pfizer is shifting creative duties on smoking-cessation drug Chantix to mcgarrybowen from McCann HumanCare. It seems that the rabbit was also pfired by Pfizer. The rabbit is missing in the most recent version of the Chantix home page (see image below; click for an enlarged view). 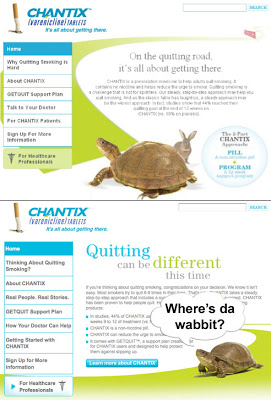 The top panel shows the page as it was on September 27, 2007, when I first noted that the web site featured a cute cuddly rabbit instead of the scrawny, reddish — devilish, may one say? — hare seen in the TV and print ads (see “A Pill, a Plan, a Profit? — Chantix!“).

Another DTC critter that we may never see again is Rozerem’s beaver, which I must take credit for making “infamous,” which is how PharmExec described it (see here). See the old vs. new Rozerem web site home page in the image below (click on the image for an enlarged view).

I just could not resist the urge to add some dialog balloons to these images, especially to the new Rozerem web site, of which a friend of mine observed “New ad agency, and they couldn’t get the eraser out fast enough, apparently.” Of course, I urged Takeda to fire their Abe and beaver ad agency a long, long time ago (see “Takeda – Fire These Guys!“).

Maybe Abe was jettisoned because we’ve just celebrated the bicentennial of Lincoln’s birthday and having ads depict America’s most beloved president playing chess and jump rope with a beaver was a bit too disrespectful, which was something I pointed out from the very beginning (see the now classic blog post I made way back in July 2006 when the Rozerem ads first aired: “Rozerem Ads Dis Lincoln, Show Beaver)”.

[To commemorate the demise of Abe and the Beaver, I will be publishing a special tribute to the duo in an upcoming issue of Pharma Marketing News.]

Only a few DTC critters remain. Come to think of it, I haven’t seen the Enablex balloon people lately. Some balloon people are known to explode due to overactive bladders and others just have sexual fun while their parents are completely oblivious (see “The Secret Lives of DTC Critters” for a hilarious video).

These ads are truly offensive because they depict potential consumers of the product as mere overactive bladders rather than real people with a real problem. Shame on Novartis for running these ads! Maybe they have seen my criticism and have fired their agency too!

Now for a little fun: