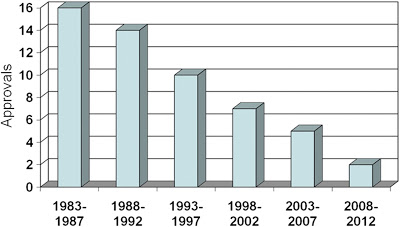 A critical shortage of antibiotic drugs threatens to “derail efforts to fight the so called superbugs,” according to a new report by the Infectious Diseases Society of America (IDSA), reports CNBC (here). You can find the IDSA report here.

New systemic antibacterial agents approved by the US Food and Drug Administration per 5-year period, through 2012, is shown in the chart below:

“At one time,” reports CNBC, “11 big pharmaceutical companies were involved in antibiotic research and development. But the ISDA report says that figure is down to four: GlaxoSmithKline, Pfizer, AstraZeneca and Merck… Johnson & Johnson has gone on record saying it is no longer involved in antibiotic research and development, citing a high cost/benefit ratio and FDA rules. Even though Pfizer continues some R&D in the area, it closed its main antibiotic center in 2011.”

“Big pharma has downsized so much. It’s reflective of the fewer businesses opportunities they see,” said Dr. Henry Chambers, an ISDA member.

FDA has been identified as the culprit because it “hasn’t always made it easy to get antibiotics approved,” Chambers added. But as an IDSA letter to Congress points out, antibiotics “provide less financial reward for companies as they are used for a short duration, typically are priced low, and must be held in reserve to protect against the development of drug resistance, rather than used widely as most other drugs are.”

In other words, antibiotics do not fit the current Big Pharma “blockbuster” model demanded by institutional stockholders and Wall Street analysts.

Instead of looking to fast track FDA regulatory processes to make antibiotic drug development more profitable for Big Pharma — as advocated by IDSA — big pharma companies should follow the lead of smaller bio-pharmaceutical companies like Cubist, which focuses “exclusively on the superbugs of today and other types of anti-resistant bacteria.”

OK, I don’t mean that Big Pharma should “focus exclusively” on anti-superbug drugs. But if they want to improve their public image as recommended by former president of Pfizer Global Research, John LaMattina (see here), they should at least emulate Cubist and “[take] the long view in the battle to find new drugs,” as Steve Gilman, chief scientific officer and executive vice president of Cubist, said. “It’s not just a bottom line issue,” Gilman said. “We want to provide for our shareholders, but we want to do something for the public as well. This is a very serious problem and it’s important for us to go home at night knowing we’ve done something for the world. That’s how we look at this.”

This sentiment is seldom heard from Big Pharma these days. But back in the day, it was George W. Merck, founder and CEO of Merck, who famously said: “We try never to forget that medicine is for the people. Not for the profits. The profits follow, and if we have remembered that, they have never failed to appear.”

Viagra Print Ad Art Imitates Life as it Could be Without...