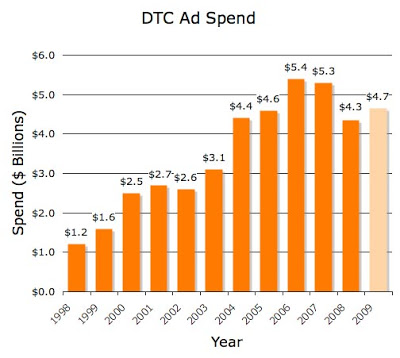 TNS Media Intelligence reports that U.S. Advertising Expenditures Declined 14.7 Percent in First Nine Months of 2009 compared to 2008. Bucking that trend was the Pharmaceuticals sector, which increased ad spending by 0.6 percent (from $3,462.7 million to $3,483.6 million) in that period.

If pharma DTC spending in the final quarter of 2009 continues at the average rate during the first three quarters, the total spend in 2009 will be about $4.7 billion, a 7.1% increase over 2008 (see chart below).

I had predicted a further decrease in DTC spending in 2009 (see “DTC Spending Will Be Decimated in 2009, Experts Say“) and this can still happen because the 0.6% increase so far is pretty slim. If Q4 spending is only $716 million instead of the $1,161 million estimated to create the chart above, then my prediction will come true.

Speaking of predictions, I have a new survey: Predicting the Future of the Drug Industry: 2010 and Beyond! Among the predictions I am seeking opinions on is this one:

Internet-based drug promotion (including search engine marketing) will overtake TV-based DTC in the U.S. in terms of dollars spent (by 2019).

TNS MI reported a 7% increase in Internet display advertising in the first nine months of 2009 vs same period in 2008. Meanwhile there was an 11.5% decrease in network TV advertising during that period and a Q3 spending tumble of 25.1%. Pharma Internet display ad spending more than tripled in the nine-month period to $221 million according to DTC Perspectives.

Even doubling that figure to account for search engine advertising, the amount that pharma spends on the Internet vs TV is miniscule ($221 + $200 million for SEM = $421 for total Internet ad spend first 9 months; Internet portion of spending pie = 12% vs 60% for TV).

Is it possible, therefore, for Internet ad spending by pharma to exceed TV ad spending by 2019? Well, about 56% of respondents to my survey think it is somewhat or highly likely to happen!

What do you think? Please take my survey now. The survey also asks your opinion about the following predictions:

Afterward you will be able to see the up-to-date results AND be able to download FREE Pharma Marketing News reprints covering many of the issues involved in these scenarios.