Pharmaguy™ (aka John Mack) presented the coveted bright yellow Hawaiian shirt/Pharmaguy™ Pioneer Award to Dennis Urbaniak, VP, Joan Mikardos, Senior Director, and Laura Kolodjesji, Senoir Manager, Patient Solutions, at Sanofi US Diabetes. The award was made at the 6th Annual Digital Pharma East conference in Philadelphia on October 17, 2012. Accepting the award on behalf of the winners — who could not make it in person — was Wendy Blackburn of Intouch Solutions.

The Pharmaguy™ Pioneer Award is meant to recognize pioneers who work (or have recently worked) within regulated drug and device companies. The award recognizes courage in the face of regulatory and corporate culture road blocks!

Urbaniak and Kolodjeski also received the greatest number of nominations in a poll I ran (see summary of results here). In comments, respondents to the poll described Urbaniak as “the most innovative guy in pharma” and said he “opened new ways of engaging with patients in the diabetes field, with courage and consistency.” Kolodjeski was praised because “she keeps the patient at the center of all her efforts. She is a great example of how we should go about our business in Pharma.” 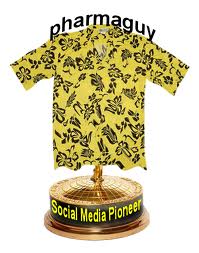 Although I didn’t wear my Hawaiian shirt at the FDA hearing, it became an emblem for standing out from the crowd, which is a necessary trait for a social media marketing pioneer. I think a Hawaiian shirt motif befits, therefore, what the Pharmaguy™ Pharma Social Media Pioneer Award stands for. Read more about the award here.