Google’s OneBox Drug “Ads” Steal Clicks from Rx Brands A Search Ad Format That Has All FDA Could Want… But Pharma Can’t Use It!

In June 2010, Google launched a NEW drug “ad” format that includes everything FDA requires that a drug company include in its direct-to-consumer advertising: fair balance, and direct links to side effects, precautions, dietary information, etc. It even includes a logo that identifies it as a special ad sanctioned by a trusted authority! Unfortunately, the new format is only for the National Institutes of Health (NIH) and NOT available to pharmaceutical advertisers.

Below is the result shown on Google after a search on “Lipitor” (click on image for an enlarged view):

Technically, these aren’t ad formats, but inclusion of structured data as a means to increase relevancy in results. It’s more like a “super” natural search result that ALWAYS appears at the top of the page, just below the paid ads; in that sense it’s an UNPAID ad. In any case, it looks like an ad and perhaps Google users may think it’s an ad. So let’s just call it an ad.

At the very top is the typical AdWord that Pfizer paid for. It’s puny and uninformative and does not mention what medical condition Lipitor is approved for. Just below it is the NIH ad, which has all the required and interesting information. It even includes a little colorful pill that draws your attention to the ad and marks it as special. When you click on the NIH ad. When you click on this “ad,” you are taken to a page on the NIH site set up especially for atorvastatin, the active ingredient in Lipitor.

This new drug ad format is the latest initiative of Google Health, which last year launched “Health OneBox” that offered easy-to-read details on illnesses and conditions with a single search.

When this ad format first appeared, I asked “Will these NIH ads compete with drug company’s paid search drug ads?” 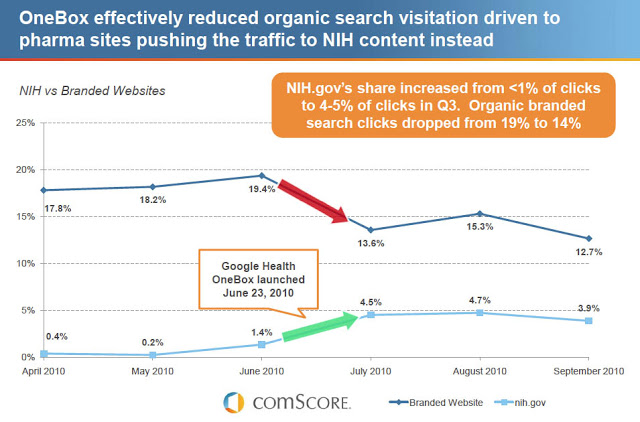 Mangano did not mention any effect that OneBox Rx ads may have on paid search Rx ads. But it is logical to conclude that Google stands to gain paid ad revenue when pharma marketers have to compete with OneBox ads by buying more paid search placements to make up for the loss of organic search visits.

Hopefully, Google’s new ad format specifically designed for pharma (see here) will win FDA approval. That format can compete more effectively with the NIH ads. Not that there’s anything wrong with the NIH ads!

One wonders why Google decided to offer “Health Onebox” ads that would canabalize paid ad revenue from the pharmaceutical company. One commenter to this story noted that the content of these ads is produced by ADAM, the same folks who provide content to Google Health. “Hmmmm…. This is a slippery slope Google,” said that commentator. Google was suspected of promoting its own content versus that of pharma companies. However, Google Health was “retired” in June, 2011, almost simultaneous with the launch of the NIH ads (see “An update on Google Health and Google PowerMeter“).

A more likely reason may have to do with an FDA/Department of Justice settlement announced in August, 2011. In that settlement, Google agreed to pay $500 million and acknowledged that it helped illegal online pharmacies target ads through its AdWords platform. It was one of the largest forfeitures ever paid in the U.S. (see “Google Settles with DOJ – Admits Aiding Illegal Online Drug Sales“).

The almost simultaneous launch of the NIH drug ad format may have been part of a “gentleman’s” side agreement with FDA to make additional restitution. FDA may have even twisted Google’s arm by sending notice of violation letters to its major pharma advertisers (for more on that, see “A Pharma Social Media Conspiracy Theory: FDA, DOJ vs. Google“).

This story was originally published in posts to Pharma Marketing Blog made on June 23, 2010 and on Februray 15, 2011.