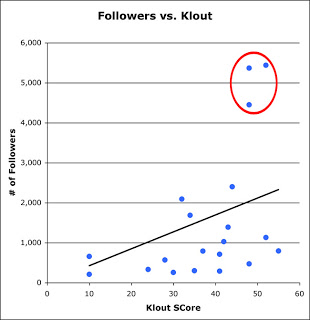 As evidenced by the first-ever pharma-hosted Twitter Chat (see “OMG! AstraZeneca Hosts Twitter Chat & World Does NOT End!“), there is still plenty of work for Pharma Social Media Pioneers to do and new pioneers to be recognized.

I will continue to search out, find, and promote new pioneers, especially those who are actively using Twitter to engage in conversation. The chart below shows the pioneers I currently have in my database (view that database here). You can also follow selected tweets from these pioneers in the ePharma Pioneer Tweets & Posts Forum.

I have included in my list people who are employed by pharmaceutical companies (or very recently so employed) and who have over 200 Twitter followers.  If you know someone who should be included and is not, please let me know (click banner below).

UPDATE (12 July 2012): I have dropped the requirement that people have over 200 followers to be on the list — only a few meet that criterium. Nevertheless, I want to recognize all pharma people who have personal Twitter accounts so the world can see what these people are tweeting about and thus get a more personalized view of pharmaceutical employees who can be the best “ambassadors” for their companies. You know, show the human faces behind the corporate curtains.

Most of these Twitter accounts are truly personal views and are not meant to speak for the company. They usually include disclaimers such as:

“All tweets are my own and do not necessarily represent my employer’s view.”

“Opinions tweeted are my own; not those of my employer”

“These tweets=Me and not my company”

A few are sanctioned by the company such as Marc Monseau’s @JNJComm.

NOTE: Marc also has a personal Twitter account (@MDMonseau), which is included in the database as well. To be fair, we should really compare this account to the others, which are also personal accounts (except for Rob Halper’s, which is @JNJVideo). Marc is kind of a special case. From day 1, his @JNJComm tweets were very personal and mostly were free of “corporate speak” language.

It’s interesting to see how some accounts have grown over time (see @Alex__Butler vs. @JNJComm in the chart below).

@TonyJewell, who was responsible for the AstraZeneca #rxsave Twitter chat (see my interview of Tony here), is a recent addition to my list. I notice that before the #rxsave chat, Tony was adding about 1 follower per day. Afterward, he is adding maybe 2 followers a day. Which goes to prove that hosting a Twitter chat can DOUBLE the rate at which you add followers! I don’t think, however, that Tony will surpass Alex any time soon.

Although there was an “anomalous” spike in followers of Alex Butler in January, it wasn’t as dramatic a spike that @Pfizer_news experienced back in December 2010 (see “How Did Pfizer Get So Many Twitter Followers?“).

Just out of curiosity, I also plotted the number of followers vs. number of tweets for these pioneers to get the following scatterplot: 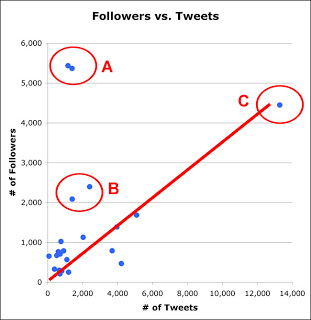 I notice right away that the top two accounts in terms of followers — @JNJComm and @Alex__Butler (labeled “A” in the chart) — have attracted a large number of followers but have not posted very many tweets. Their Follower to Tweet ratio is 4.7 whereas the norm is closer to 0.35 (that is, # followers = 0.35 x # of tweets). The “B” people are also somewhat off the norm. Obviously, it’s not about the quantity of your tweets, but could be about the quality.

“C” (@shwen) is way out their on his own. Shwen has posted an incredible 13,280 tweets! But he has been doing this probably longer than anyone else.

Another factor to consider is how many people these pioneers follow. We always praise those pharma people who follow a lot of other people on Twitter. It indicates they are listening to many points of view. Here’s another chart: 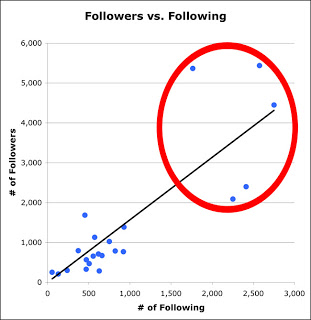 There’s definitely a “gang of five” pioneers that stand out from the crowd in this regard:

Another parameter that is often used to rate Twitter accounts is the “Klout” score, which measures overall online influence. The scores range from 1 to 100 with higher scores representing a wider and stronger sphere of influence. Klout uses over 35 variables on Facebook and Twitter to measure True Reach, Amplification Probability, and Network Score. You can find anyone’s Klout score by typing “http://klout.com/[twitter name]” as in http://klout.com/pharmaguy.

In the chart below, I plotted # of Followers vs. Klout to see if there was a relation between the two:

There doesn’t seem to be much relation between a person’s Klout score and the number of followers of that person (ie, having many followers doesn’t guarantee you will have a proportionately high Klout score and vice versa).

In this case, there is a “gang of three” pharma Twitter pioneers that stand out from the crowd:

@brainygirlnyc (Zarya Rubin, who works for UCB as CNS Medical Science Liaison) has the highest Klout score of the group: 55

Klout says that @brainygirlnyc is an Explorer who actively engages in the social web, constantly trying out new ways to interact and network. She’s exploring the ecosystem and making it work for her. Her level of activity and engagement shows that she “gets it.” Klout predicts she’ll be moving up.

There must be many other ways to measure the “influence” these pioneers have besides the number of followers, followings, and tweets. What I intend to do is pay closer attention to what these people are saying on Twitter and give each of them my own unique “Pharmaguy Influence” rating, the parameters of which are yet to be determined.