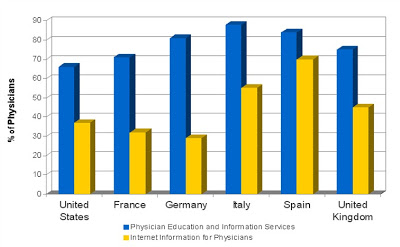 Consequences of eDetailing Technology The Death of the Traditional Pharma Salesman 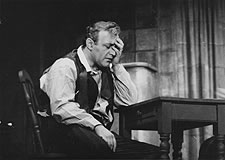 “You can’t eat the orange and throw the peel away — a man is not a piece of fruit,” says Willy Loman in Act 2 of Death of a Salesman. After reading this article published in the Wall Street Journal on 10th May 2011, many pharma sales reps may be feeling like tossed peeled fruit these days.

“Big pharmaceutical companies have found replacements for the army of sales representatives they’ve laid off in recent years: digital sales tools that seek to sell doctors on drugs without the intrusion of an office visit,” says the WSJ. 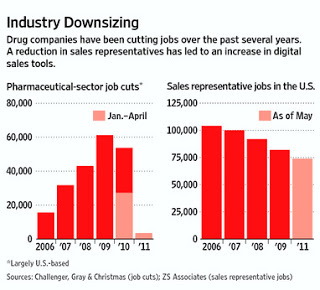 “Tens of thousands of pharmaceutical sales reps have been eliminated in the U.S., creating a void that drug makers are now increasingly filling with websites, iPad apps and other digital tools to interact with doctors who prescribe their treatments.”

Let’s refer to “digital sales tools that seek to sell doctors on drugs without the intrusion of an office visit” as “eDetailing.”

eDetailing in one form or another seems to be making a comeback since the recession hit the drug industry in 2007 and 2008 (see chart on right). I’m not really sure which is the “chicken” and which is the “egg”; ie, whether an uptick in adoption of eDetailing technology lead to the recent layoff of pharma reps or if reps were laid off because of the economy and subsequently replaced by machines.

Despite the title of this article, reports of the death of pharma “salesmen” may be somewhat exaggerated and not all sales reps can be replaced by machines. According to the WSJ:

“When German drug maker Boehringer Ingelheim GmbH launched the cardiovascular drug Pradaxa in the U.S., it put together a digital-marketing package to target doctors, including organizing webcasts for leading physicians to speak to other physicians about the drug. But the company found that sales calls to doctors’ offices were still the most powerful tool for driving new prescriptions, says Wa’el Hashad, vice president of cardiovascular and metabolic marketing. ‘No doubt digital marketing does have an impact…I don’t believe, however, the shift happens overnight. I think it’s a gradual shift,’ he says.”

In the Pharma Marketing News article “The Changing Role of Pharma Sales Reps,” Nancy Lurker, CEO of PDI, Inc., says “reaching physicians requires a new level of sophistication. Live rep calls and dinner meetings and other live venues, however, are not going to go away. But the relative market share in terms of the amount of effort and money that is spent on live interactions is going to shrink and you’re going to see more money being spent in the digital communications space.”

Some sales reps will morph into what I call “sales cyborgs” who engage in remote live human conversations with physicians aided by technology. See “Pharma TeleWeb e-Detailing” for more information about that.

Predicting the Impact of Technology on Sales
As of now, pilot programs such as TeleWeb e-Detailing have not been evaluated on how well they drive sales, but on other key indicators of success. Notwithstanding push back by some pharma marketing and sales managers, sales technology will continue to evolve and have greater impact in driving new prescriptions. 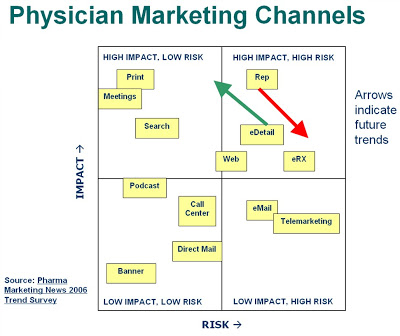 Internet vs. Sales Reps: Which Do Docs Prefer?

Verispan’s 2007 ePromotion Annual Study estimates that “ten percent of doctors opted for electronic detailing instead of in-person sales calls with pharmaceutical reps,” according to PharmaExec.com.

PharmExec.com published some other “hard to ignore” numbers from this study:

Merck Leads the Way
The Verispan audit singles out Merck, whose spending on ePromotion activities has more than quadrupled over the last 3 years, reaching almost $83 million in 2007. In fact, Merck currently leads the industry in ePromotion investment, accounting for over 20% of industry spending for this promotional method. It appears that Merck is walking the walk as well as talking the talk when it comes to using technology to improve marketing and sales ROI (see “Merck Rejiggers Its Marketing Mix: Will Other Pharma Companies Follow?“).

Verispan defines ePromotion as video details, online events and virtual details. It’s all about product information. But what about other information of interest or value to physicians that is not all about the brand?

TNS Healthcare is interested in what drives physicians to be loyal to a drug brand (see, for example, “Reinventing the Sales Model“). They have found, for example, that US primary care physicians value physician education and information services provided by pharmaceutical companies as much as the quality of sales reps’ visits (66% vs. 68% of physicians surveyed value the former vs. the latter, respectively).

Internet vs. Sales Reps
But how valuable is the Internet as a source of this information vs. sales reps? TNS surveyed physicians in 6 countries (US, UK, France, Germany, Spain, and Italy) to find the answer to this and other questions.

The survey showed a wide variation in the value that primary care physicians place on the Internet vs. pharma sales reps as a source of education and information services (see chart, click for an enlarged view).

In the US, Internet services, while not as popular among physicians as other aspects of the relationship, did show a move to be valued by more physicians in 2008 vs. 2007 (42% vs. 37%, respectively).

“Given the amount of attention and spending devoted to Internet services generally, it is surprising that the Internet does not represent an area of greater physician demand,” said Jonathan Kay, President, Portfolio, TNS Healthcare. He made his comments during a recent webinar.

You can learn more about the TNS physician survey and what it means for developing a more customer-centric sales and marketing strategy in the upcoming April, 2008 issue of Pharma Marketing News. Subscribe today and get it free!

Meanwhile, see a summary of the 2007 TNS US survey here.