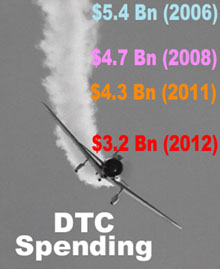 Direct-to-Consumer (DTC) advertising took a nosedive in 2012. According to data from cegedim Strategic Data, DTC spending decreased by 22% in 2012 compared to 2011.

The decline in DTC spending has been more or less steady since the 2006 when the industry spent more than $5.4 billion. What is causing the whimpering end of DTC?

As many experts have pointed out, there are several likely causes, including the recession of 2007-2008, shrinking pipeline (fewer new drugs means fewer ads), and the rise of generics (which generally are not advertised).

This article reviews data that supports one cause not often mentioned: the shift to developing drugs for small populations of patients (so-called “orphan” drugs) and complex biologics, which may also be targeted to small populations.