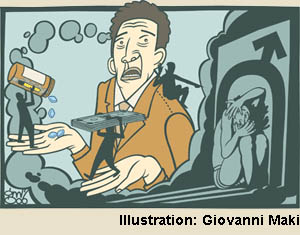 Back in July, 2005, I wrote that “Indication Bloat” would be the next DTC issue (see post to Pharma Marketing Blog). In that blog post I stated that “replacing branded DTC with non-branded [disease awareness advertising] may create a new problem — what I call ‘indication bloat,’ or redefining a disease to increase the scope of the approved indication for a drug.”

Some industry critics, however, call disease awareness campaigns “disease mongering” and there has been a lot of noise on the subject recently. Disease mongering — according to an issue of PLoS Medicine devoted to the subject — is “the effort by pharmaceutical companies (or others with similar financial interests) to enlarge the market for a treatment by convincing people that they are sick and need medical intervention.”

Some “diseases” that the PLoS authors consider “mongered” include:

Add Erectile Dysfunction to That List
Recently, Pfizer and other pharmaceutical companies in the ED market have stepped up their use of unbranded DTC ads to promote awareness of the condition. These ads specifically warn men that diabetes, high blood pressure and even high cholesterol can cause ED. Pfizer goes so far to say on its product Web site that “over half of all men over 40 have ED to some degree.”

ED: It’s A Little Problem After All!
“What is not generally spelled out,” says a New York Times article, “is that about 80 percent of those classified as having erectile dysfunction in the study were categorized as having only a moderate or minimal problem.”

Peter Rost — pharma’s black knight — accuses Pfizer of trying to “convince men that they can’t perform.” I would say that it is Pfizer that can’t perform, at least some of the time. Viagra sales, it was reported not long ago, are limp!

I suspect the sales goals for Viagra et al are not being met because ED drug marketers are drinking their own Kool Aid regarding the high estimated prevalence of the condition.

But marketers are clever. In one fell swoop the new ED “disease awareness” ads have expanded the market for ED while at the same time managed to come up smelling like roses by complying with PhRMA’s Guiding Principles for DTC Advertising. Some experts thought Levitra marketers in particular were ballsy coming out with these ads because it’s a well-known axiom in pharmaceutical marketing that disease awareness ads benefit the market leader (ie, Viagra) most. In this case, however, “disease mongering” (aka, “indication bloat”) – or, if you prefer, “disease awareness” – efforts are a rising tide that will float all ED drug ships.